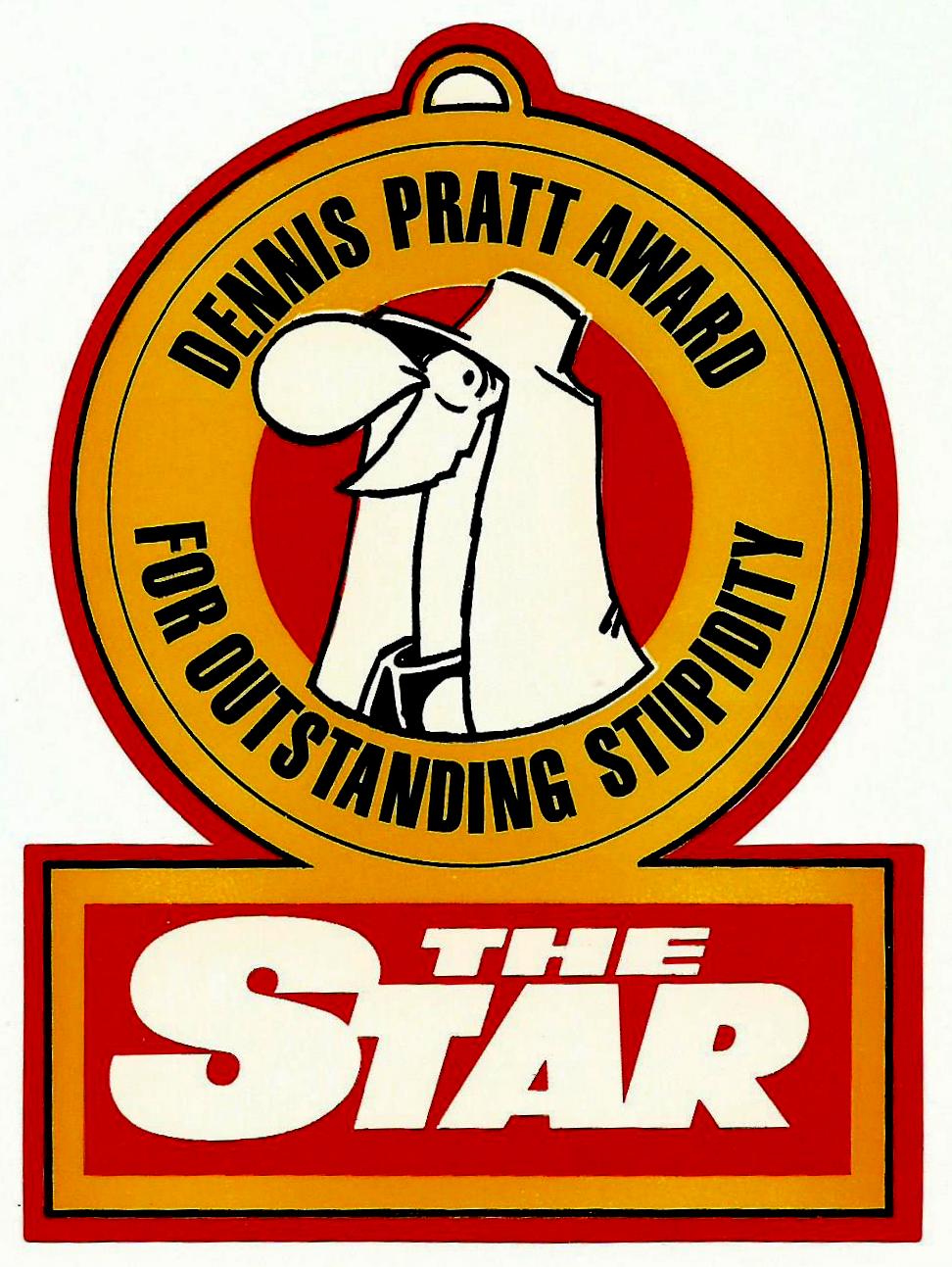 On the 22nd May 1987, the American pop band ‘Beastie Boys’ flew into Heathrow Airport for the UK leg of their European Tour.
The Daily Star reported that they “...shrieked foul-mouthed obscenities while their thuggish minders shoved and jostled Pressmen.” It went on to say that one of the band members launched a savage kick at a photographer who was being manhandled by one of their minders.
At the press conference the band allegedly chanted “we hate Britain, we hate Britain”, and "screamed a barrage of 4-letter words at reporters." They also, it was said, refused to answer any questions about the "havoc" they caused during their previous concerts around Europe. 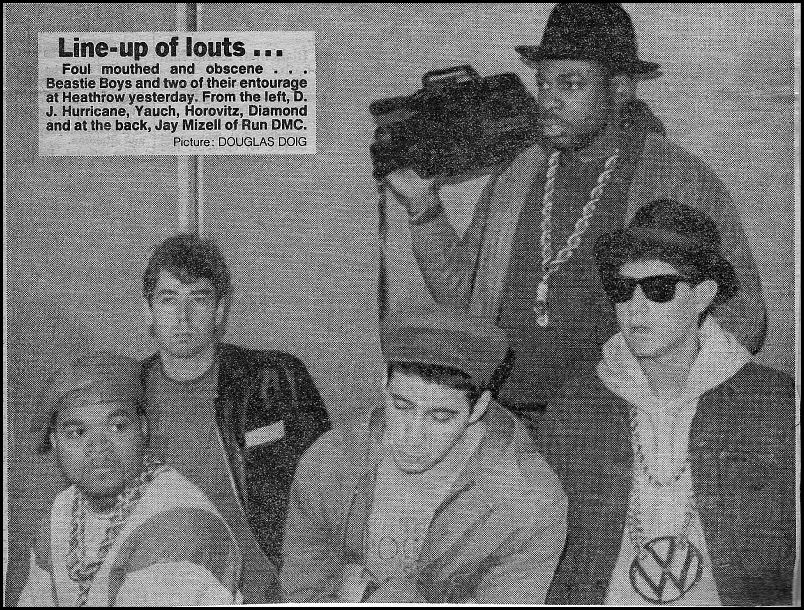 The Beastie Boys at the press conference.

The Daily Star headlined their report “WE HATE THE BEASTIE BOYS“, and went on to comment:

“The Star has a message for the beastly Beastie Boys: We hate you too. Britain doesn’t want your loutish behaviour contrived, as it is, to gain maximum publicity.
Today we use the Beastie Boys to launch our ‘Dennis Pratt Awards for Outstanding Stupidity’.
The awards -- named after Beau Peep’s thick cartoon side-kick -- are intended to recognise absolute pratts. And the Beastie Boys’ ridiculous antics eminently qualify them for it.”

Then, over the next few months, the Star gave these accolades to other people they thought deserved them, and illustrated the reports with the ‘Dennis Pratt Award for Outstanding Stupidity’ logo. The recipients included: 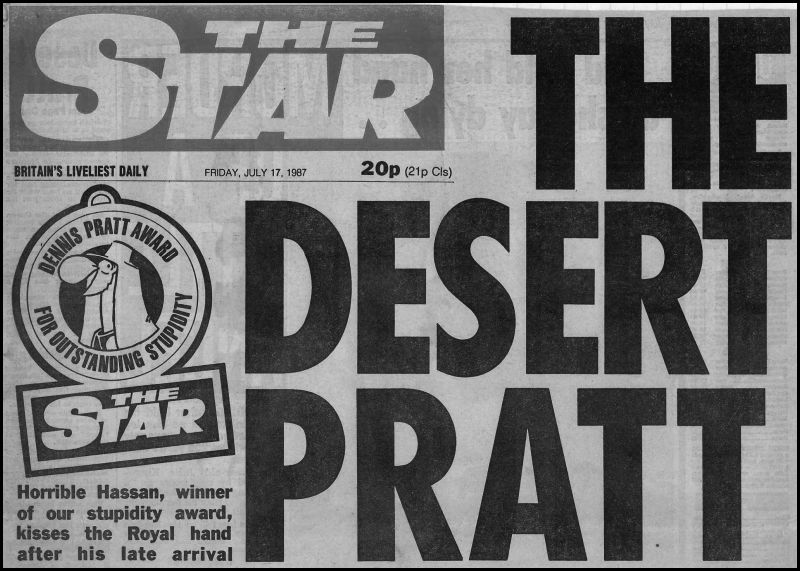 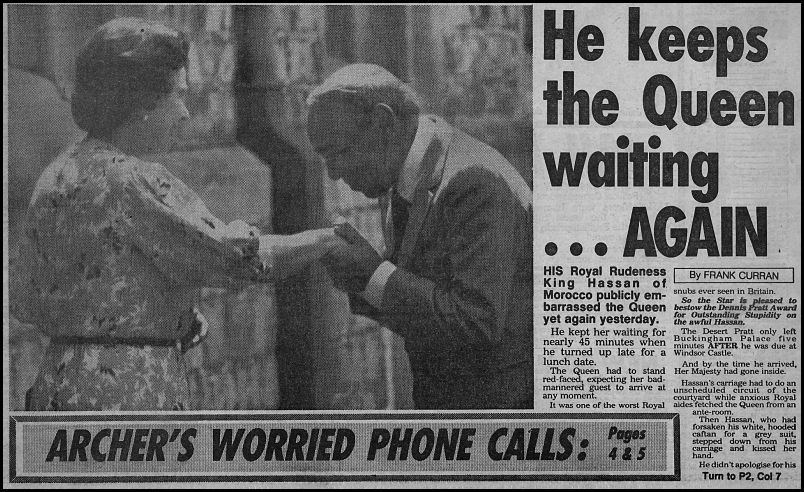 The King was dubbed “the dawdling son of the sand dunes” for keeping HM the Queen waiting for 45 minutes for her dinner at a banquet to which he had been invited.

The next day, Star reporter Amanda Perthen placed a Dennis Pratt sticker onto the grill of his Rolls Royce while it was parked outside the Claridges hotel in London. Earlier she had tried to present the award to the King in person but “.....one of his aides took it from my hand and hurled it to the ground in fury, seconds later.” The Star reported that the Earl of Winchilsea (who?!) backed the decision to give Hassan the award. The Earl's assistant said: "Hassan undoubtedly deserves it for his stupid, insensitive behaviour towards the Queen."

Joan, 53, was a Grimsby housewife who "instead of washing her cabbage in salt - she soaked it in washing-up liquid. It was only when she started to rinse it under the tap she realised her mistake and turned her kitchen into a mass of bubbles".
Husband Ken, 57, said: "Joan let out this awful scream and I thought she had cut herself. When I realised what she had done I couldn't believe it. She's very keen on hygiene - but this was going a bit too far."
Joan said: "I was left speechless - I felt such a fool."

The cast of Eastenders

Simply because, according to the Star, the actors in this BBC TV soap opera were “a bunch of Pratts”. 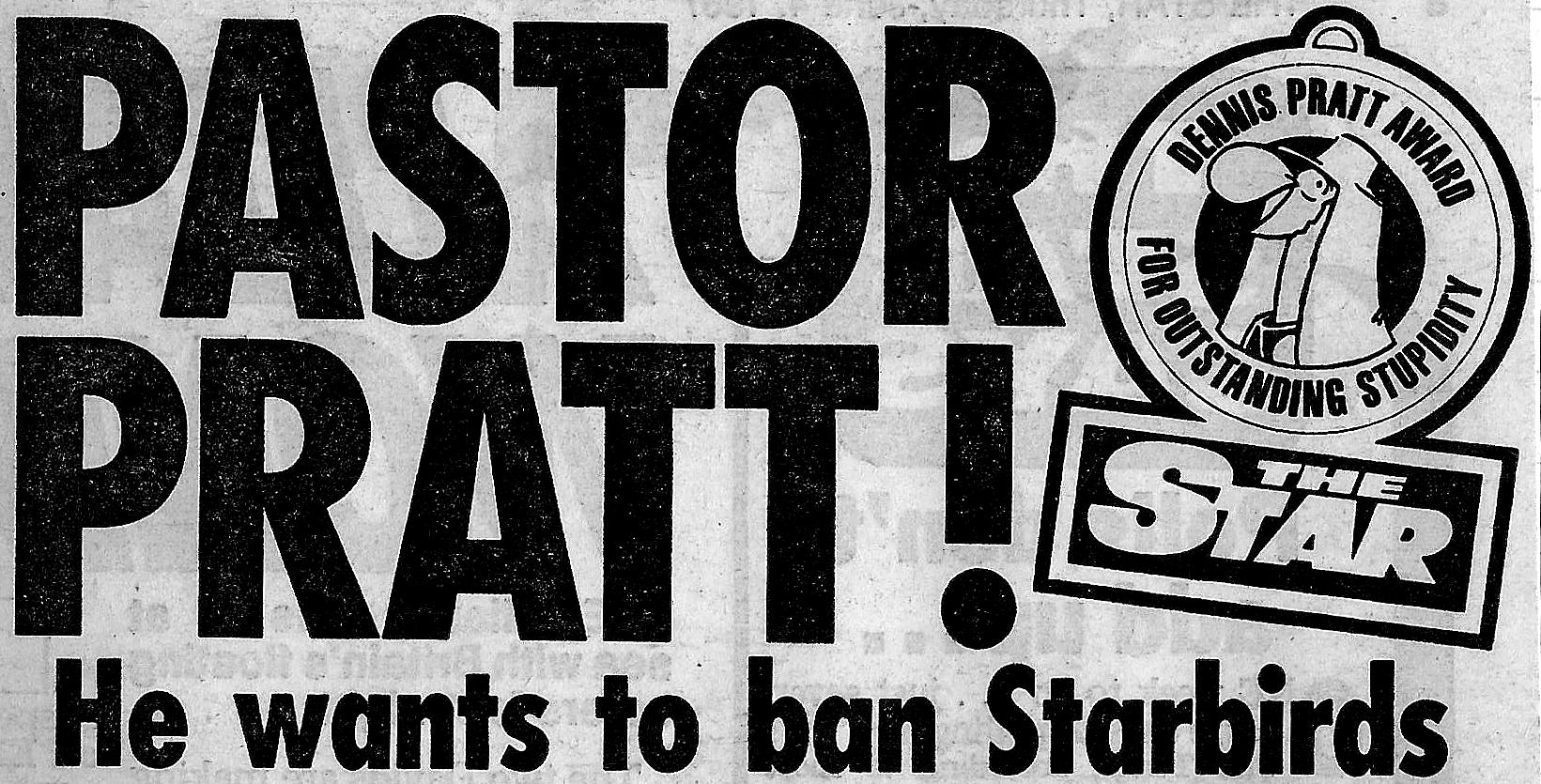 David Carson was an electrician and lay-preacher (or “potty pastor” as the Star called him), from Chester, who wanted to stand for Parliament in order to "ban nudity".

The Prime Minister’s son was given the award for "trying to sneak into the Royal enclosure at Ascot".

Mike was a police superintendent who issued a ban on fans taking bunches of celery to matches at Swindon Town Football Club.
Apparently it was the tradition of the Swindon home fans to sing ‘The Celery Song’ whilst throwing sticks of celery into the air.
Superintendent Rogers said: “Any article which could cause distress or incitement is not allowed into the ground.”
A spokesman for the FA said the ban was the first he had heard of it, and added: “I suppose celery could inflict some damage if it’s crisp -- but not if it’s limp.” 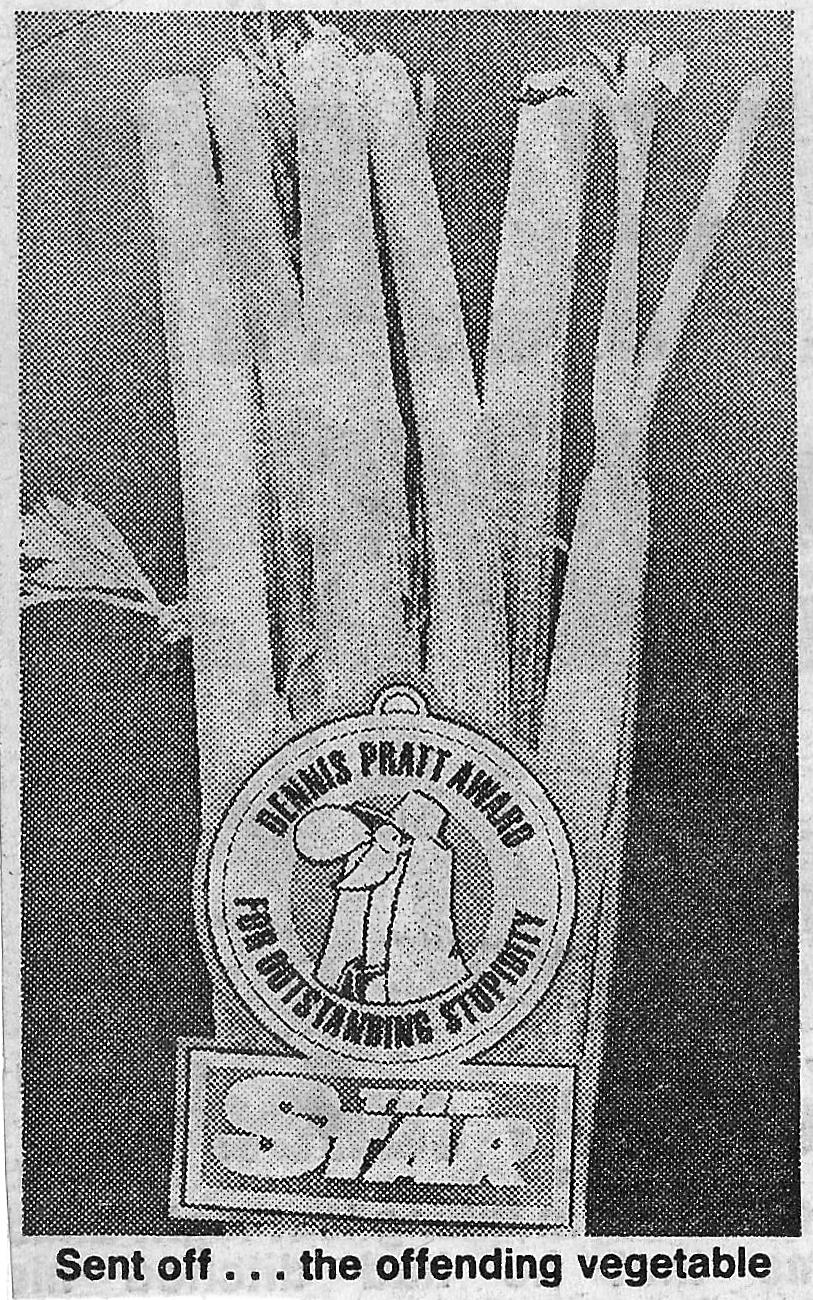 John was a private in the Royal Engineers who accidentally caused a power cut which left the British Forces Broadcasting Service unable to transmit. 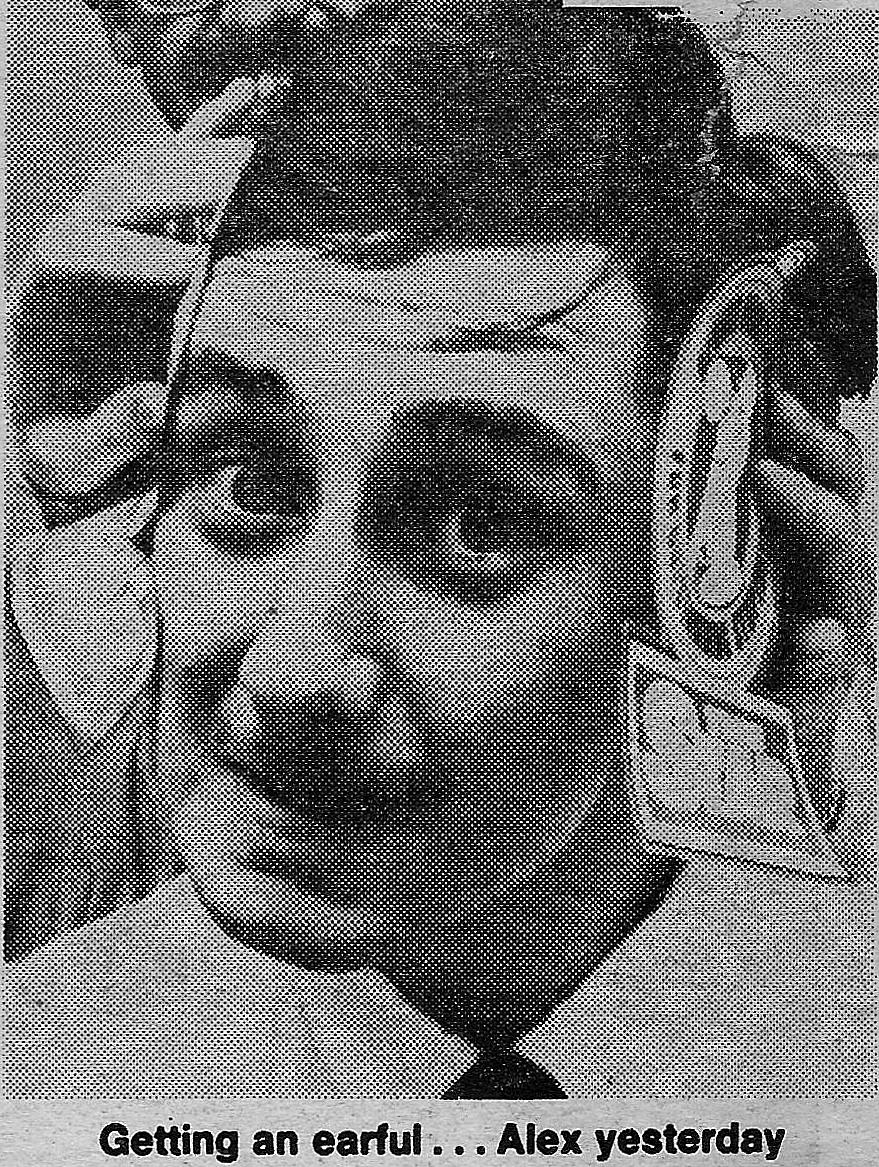 Alex was a 20-year old imports clerk from Manchester who apparently, when riled, would head-butt the office furniture. His boss, Dave Stanley, said: “Alex is known as 'The Snapper' -- our filing cabinets are full of dents where he has assaulted them. He's quite partial to Ford Escorts in his outdoor 'snaps', and he's even head-butted the bottom of our local swimming pool. We nominated him because he is a pratt.”

Thirty sixth-form pupils were given the award for presenting their teachers with end-of-term chocolate cakes -- spiked with laxatives. The Star headline was "PRANK HAS TEACHERS ON THE RUN".

On the 30th June 1987, under the headline ’Quentin owns up to being a Pratt’, the Daily Star reported: “Flamboyant Quentin Crisp has award HIMSELF The Star’s Dennis Pratt Award for Outstanding stupidity...because that’s his real name!
Crisp -- famed for his book The Naked Civil Servant -- ceased to be a Pratt (in name at least) during his twenties. He’s now 78. But he reckons he deserves the award “because I've lived a totally misguided life.” 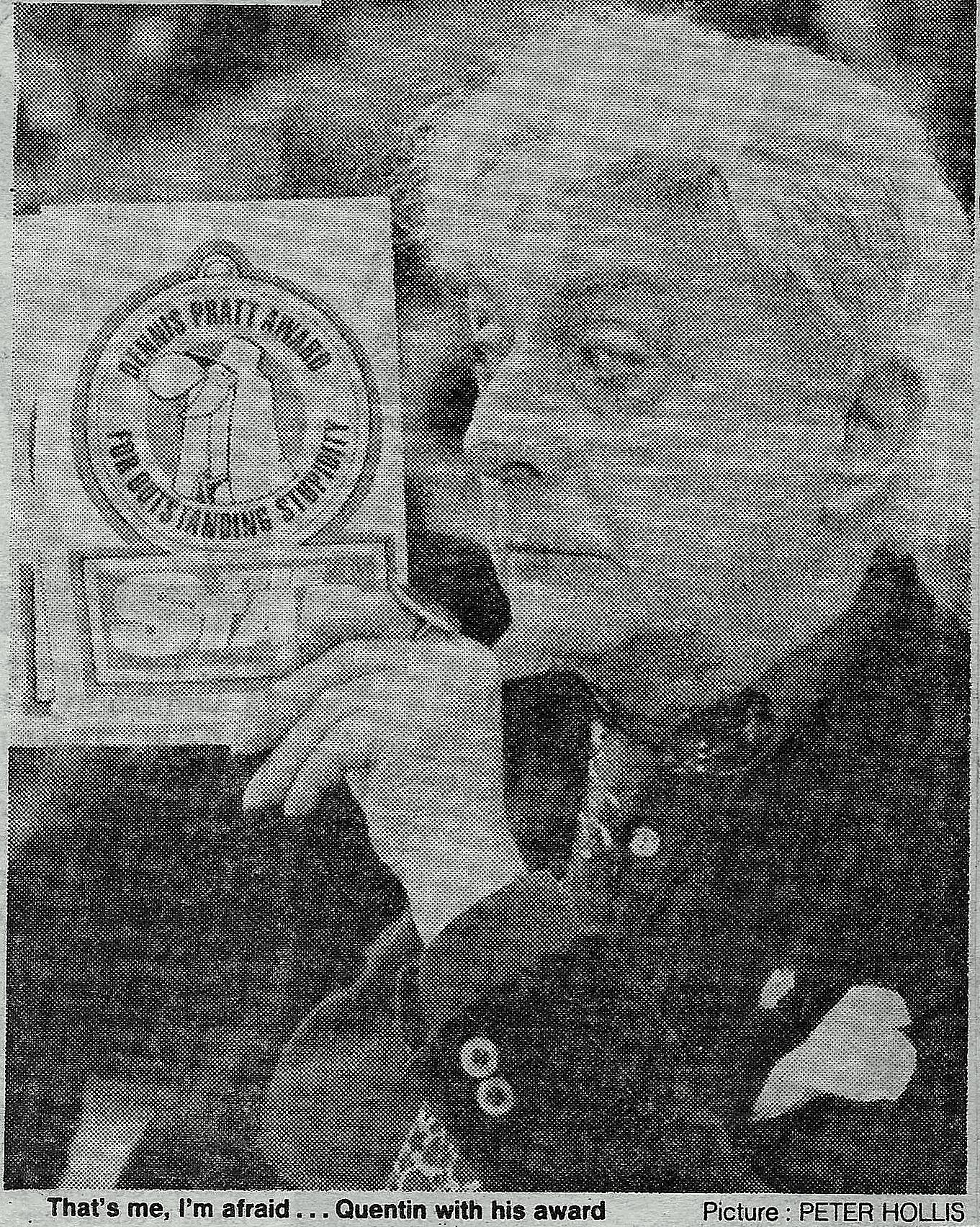 He wore black eyeliner, and a hint of rouge to set off his mauve-rinsed hair when we met at Chelsea Art Club.
He was over from America -- “where I now live, and where I’m allowed to parade my stupidity” -- to tour in his controversial stage show.
Crisp refused as first to nominate anyone else for a Pratt Award, saying: “It’s not for me, being stupid, to say anyone else is stupid.” But then, with a wicked twinkle in his eye, he added: “I should imagine one should go to The Star’s editor!”.
For he explained: “In my, by-no-means humble, opinion, the person who invented this award should certainly receive it....”

Readers could apply for their own stickers:

The Star was inundated with request for the stickers: 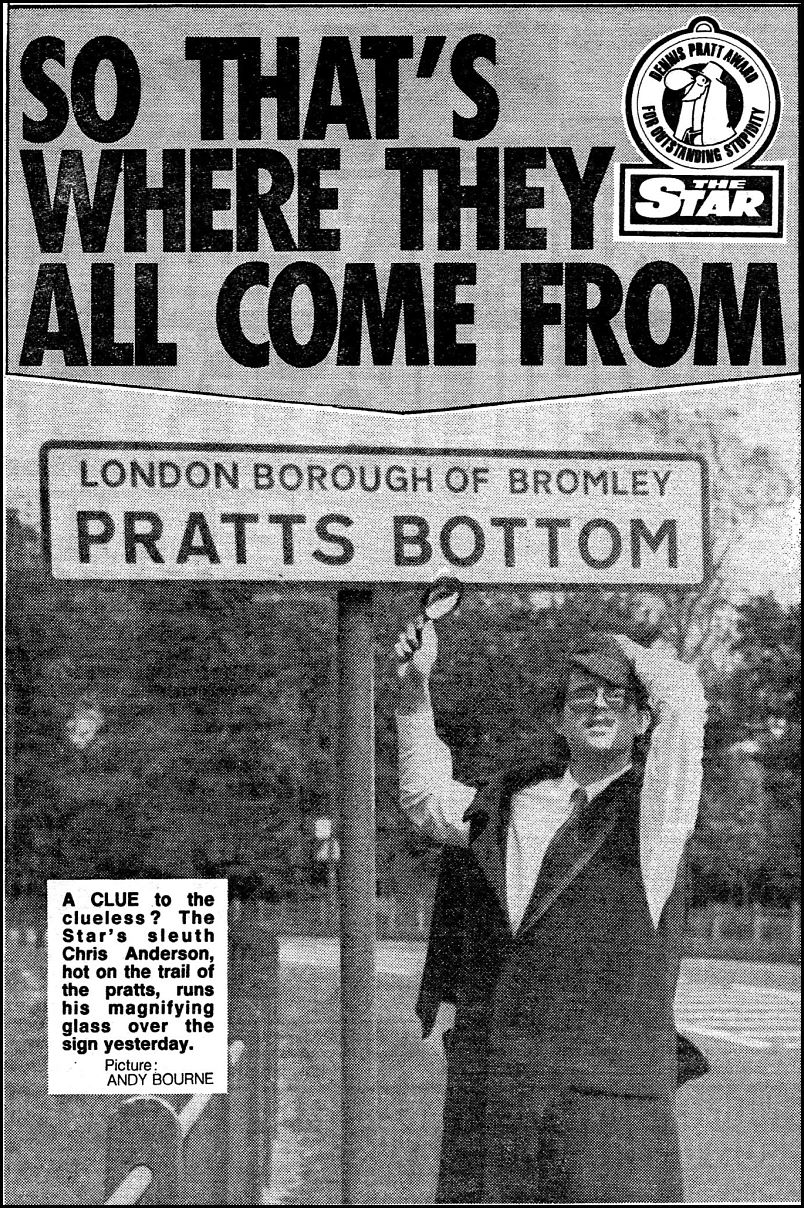 The Star even sent a reporter out to find out where all the Pratts in the world come from.

"It was a baffling case", he said, "but I was determined to get to the bottom of it.
I had already dismissed as fraudulent the claims of Baden-Prattsburg in Germany, Colombey-les-deux-Pratts in France, and Prattoria in South Africa.
But yesterday I donned my Sherlock Holmes cape and deerstalker to examine the most promising candidate yet - Pratts Bottom near Orpington, Kent. Could this be the legendary home of The Star's Dennis Pratt? Who was the original Pratt? And why is his posterior remembered by posterity?
These were the questions that troubled me as I embarked on an inquiry sparked off by The Star's crazily successful stupidity award.
I quick discovered that not everyone in the village is proud to be a Pratt. "I'm a very sensible person," insisted Patricia Johnson, 65.
In the Bull's Head, landlady Theresa Mardell said: "I think it's a lovely name but others won't even discuss it. Some residents even refuse to give it in their address and say they live in the next village." But Theresa couldn't explain the name.
And neither could village character Wally McPherson, 82. "I've no idea how it came about," he confessed.

The paper also tracked down the 'real' Dennis: 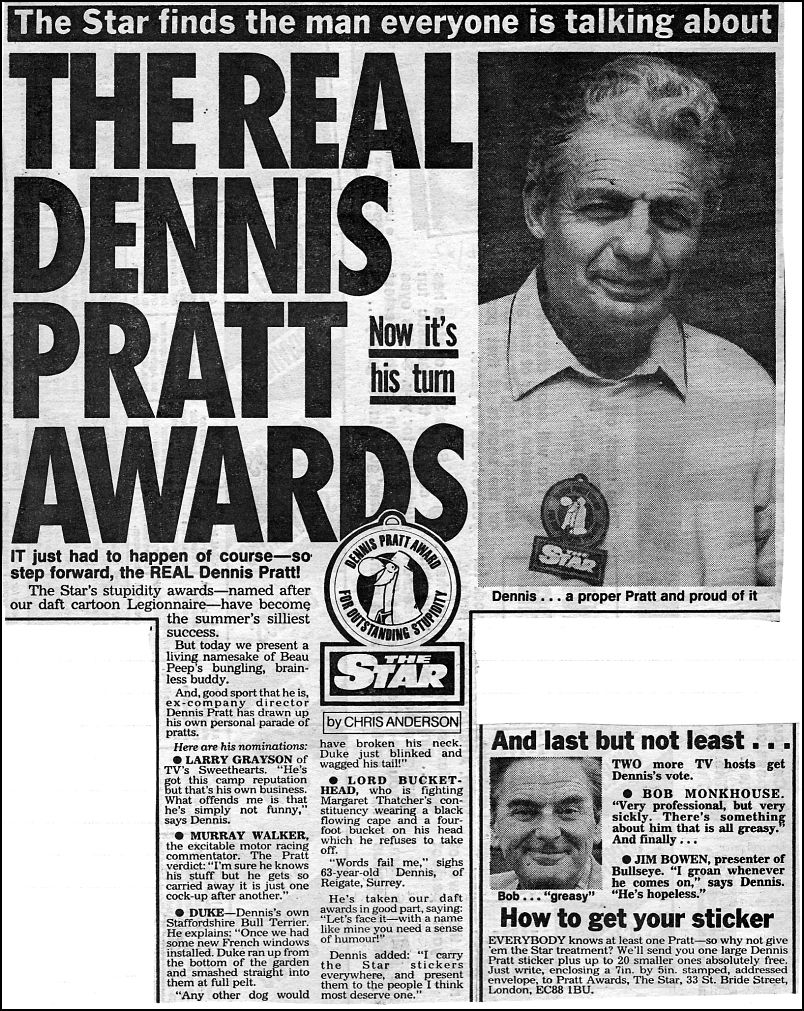 And a postman with a Dennis Pratt Award cap badge: 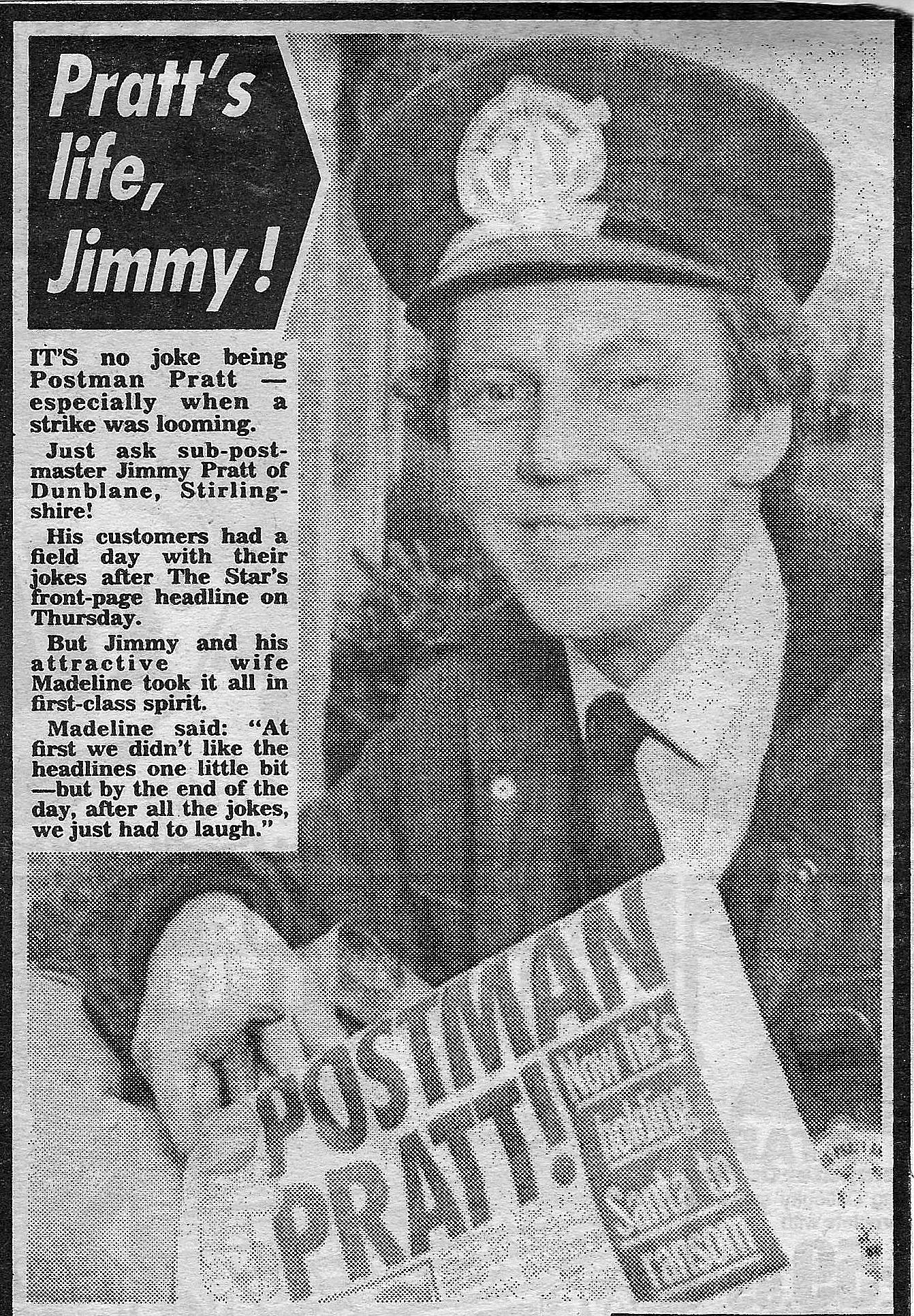