It is a unique breed of man who finds himself in the burning deserts of North Africa as a member of the Foreign Legion. He is tough. He is fearless. He is capable of suffering unspeakable hardships to honour the Legion's motto ‘March Or Die’ . Then again there's always one cowardy-custard who has to be different. 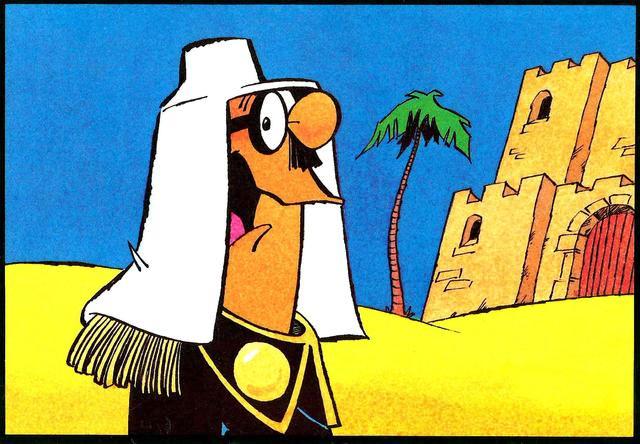 These are the facts: Doris fancied Bert. But our hero, no mug, was careful not to get himself compromised. Then came the fateful night at the local palais when ale-induced gallantry and misted-up specs drove Bert into Doris’s beefy arms for the last waltz. For Doris that was as good as a proposal.

When he sobered up Bert saw the icy clarity that there was only one thing a man of honour could do. A bunk. But Doris was not to be so easily discouraged, and her relentless determination to land her catch drove Bert even further from home.

At last came the night in a steamy dockside bar when a friendly Frenchman bought him a drink, then another, and another...Bert foggily recalls that somewhere along the line he signed something. Anyway, he came round on a ship bound for North Africa with an apocalyptic hangover and a new identity – Beau Peep of the Foreign Legion.

That was a long time ago, but sun and sand, time and Tuaregs have not dimmed the memory of what lies behind him, and whenever Sergeant Bidet or Mad Pierre or dumb Dennis (who probably meant to join the British Legion) get too much for him, Bert thinks of Doris, shudders and counts his blessings.

Beau's first appearance was, quite rightly, in Strip Number 1 on 2nd November 1978:

The young lady in this strip isn't quite as terrifying/hairy/gargantuan as Doris is described as, in the later strips. Roger Kettle explains:

"I really don't have any defence for this. That was simply the first idea that came into my head when I decided to try and write a Foreign Legion strip----I hadn't a clue where the whole thing was leading. Later, when it started being published, it made more sense to have the woman Beau left behind portrayed as the cliched ugly, fat reason he joined up. I ignored the first strip completely."

His best mate is Dennis Pratt and they often escape the confines of their dreary existence by going down to the local Kasbah and getting blind drunk.

Beau is cowardly, underhanded, pompous, incompetent, and inept. His colleagues view him as an annoyance, and his superiors view him as a loser without hope of promotion – he has failed his sergeant's exam no fewer than eighteen times.

On another occasion, when confronted with a difficult question, he simply ate the exam paper.

Beau views himself as a brave, gallant, witty, handsome, intellectual, and cultured individual with great ambitions.

BEAU: You know, I always dreamed I could be a famous conductor.
DENNIS: I suppose the one-man buses put a stop to that.

On sneaking a look at his personnel file, Beau tries to work out how discreetly enhance things. “How do you slightly change ‘utterly brainless idiot’ ?”

His medical file is no better: “…suffers from terminal ugliness…".