"I write a 6-day series of Beau at one time. This may take a morning, a day or even two days I've written six Beau Peep strips (a week's material) in two hours. I've also written six Beau Peep strips in six days.
I write the scripts and draw out the figures, with expressions and word balloons, by pen on a drawing pad, and fax these scripts to Andrew (who is based in Fife, Scotland).
Using these rough sketches, Andrew will take 2-3 days doing the illustrating and the lettering. He then emails the finished work to The Star.
This is for six 4-panel strips, as we do them on a weekly basis, starting on a Monday and hand them over to the Daily Star on a Saturday. We work very closely on Beau Peep and depend greatly on each other."

Here are Roger's sketches for a Beau Peep series from October 2001, with Andrew's finished strips, as published in the Daily Star, for comparison. 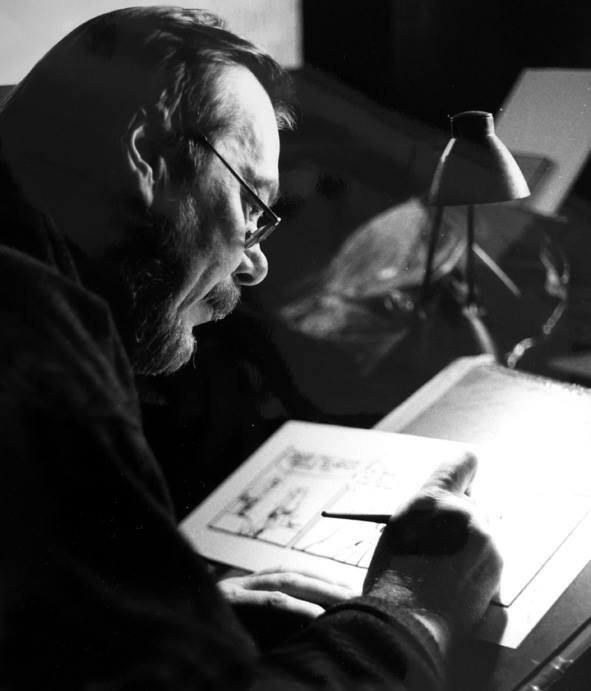 Andrew Christine working on a Beau Peep strip in his Fife studio.

This is an original 17" x 7" Beau Peep strip as drawn by Andrew Christine. The strips are scanned in and colourised by the Daily Star's art department -- the original remains in black and white.

As shown by the tape measure in this photograph, the Daily Star process department has reduced its size by nearly two thirds for publication in the paper on 19-03-1994:

Nowadays the strips, unfortunately, are reproduced in the paper a lot smaller than they once were, when Beau graced the bottom of the back page. The smallest size ever seen (just!) was a little less than 4" across! It's also a little hit and miss whether the strip will be published in colour everyday, as shown in the 'film' series above.

And for completion, its slightly larger re-print in Book 17: 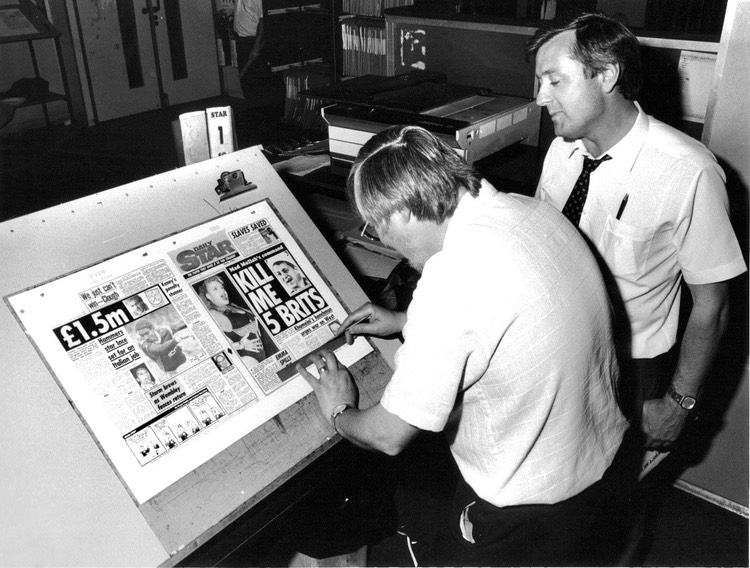 Putting the final touches to the Star's front page before going to press. Beau is seen on the bottom of the back page, on the left. This picture records the very last edition of the paper to be printed in Ancoats, Manchester, on 20th May 1989. The Daily Star and the Daily Express were then produced in London.

"I was once explaining to someone about the process of producing Beau Peep -- I was the writer and Andrew Christine was the artist.
"That's all you do?" came the reply "Andrew draws the whole thing, and you fill in the bubbles?"
He genuinely believed that Andrew handed me a completed strip and that I then popped a few words into the empty balloons.
I didn't bother telling him otherwise."