The Andy Capp cartoon strip was created, written and drawn by Reg Smythe, and has been in the Daily Mirror since 1958. 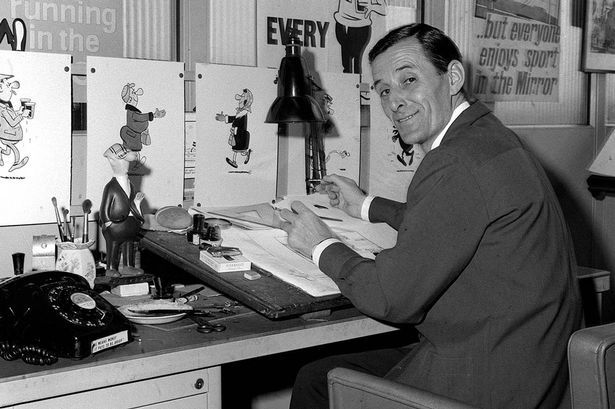 Reg died in 1998, but the Mirror wanted the strip to continue. The Mirror’s cartoon editor, Ken Layson, approached Roger Kettle, as he was already writing Horace, and asked him if he’d be interested in taking over writing the Andy Capp strip too. Roger agreed:

"I remember answering that if I managed to get ONE strip published, I'd be delighted. Back in the nineties, I had the great pleasure of having lunch with Reg and he was the most modest, charming and entertaining company you could ever imagine. He even indulged me in my starry-eyed questions about his work -- I had grown up with his wonderful strip and it had been a huge influence on my own career. A gent and a genius"

Layson’s next stop was Roger Mahoney, the artist he’d commissioned to draw the Mirror's 'Mandy Capp' strip (with writer Carla Ostrer). Roger M. is a remarkably versatile artist, who sold his first cartoons to the Mirror and the Daily Sketch in the early 1950s, and had since contributed strips to the Scottish Daily Record, the Sunday Express and the Daily Star. He’d taken over a popular Daily Express strip called The Gambols when its creator Barry Appleby died in 1996, and drawn it in flawless imitation of Appleby’s style there for the following three years.

Roger M was very aware of the weight of Andy’s history as he studied Smythe’s style and taught himself to copy its smallest quirks, and said:

“It’s a tremendous responsibility taking over a world-class cartoon strip like Andy Capp. You need to remember that, with all one’s experience in this field of work, and all the strips of your own that you’re created and sold, you have never achieved the success that Reg Smythe did. Every detail of the Andy Capp strip has contributed to its worldwide fame and it needs constant attention to detail to keep the drawing from developing away from the original.” 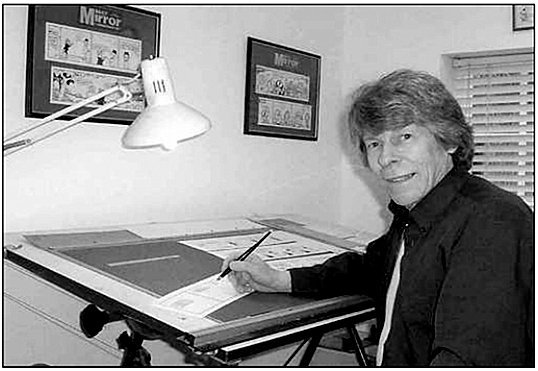 In order for the change of style from Reg to the Two Rogers' to appear seamless, the new strips were periodically slotted into the material Reg Smythe had left behind. Reg was a prolific cartoonist and after his death there were over a year’s worth of unpublished strips. So, from around 2000, when the stock pile ran out, all the strips published in the Mirror were the work of the two Rogers, though neither were credited for a while.

”We were both happy to remain anonymous -- Reg was an impossible act to follow. In the beginning, I tried very hard to copy Reg's humour but, inevitably, my own style soon kicked in. While I'd like to think I still capture the essence of Andy, there was a depth to Reg's writing that I don't even come close to.
He had a brilliant way of conveying the love between Andy and Flo -- despite the warring facade -- that is simply beyond me. My stuff makes it look like they hate each other and it drives me mad that I can't capture that magical, and essential, element of underlying devotion.
I also had to work extremely hard not to turn Andy's mate, Chalkie, into Dennis!

The Two Rogers were eventually named on the strip from 2004 onward.

At the end of 2010, Roger announced he had "...made the difficult decision to give up the writing of Andy Capp. My work will continue to appear for the next couple of months, but after that the scripts will have been written by somebody else....and after ten years of writing three daily strips, my brain asked for a break..."

"This weekend, I will send off my last Andy Capp scripts. After the death of its creator in 1998, the brilliant Reg Smythe, I was asked to write the strip and it was too great an honour to turn down. For a couple of years, my periodical scripts were slotted in with the material that Reg had left behind but, from around the middle of 2000, all the strips that appeared were written by me. This meant that, with my Beau and Horace commitments, I was writing a thousand comic strips a year. A decade on and it was time to call it a day.
I had been working six days a week with one week's annual holiday. After my break in Portugal last October, I realised that, if things didn't change, I would be working every weekend till my next holiday in a year's time.
I contacted the Daily Mirror and asked them to get something in place. It's taken a few months but I have now officially given up the writing of Andy Capp. My work will continue to appear until sometime in May or June but, after that, it will be done by someone else.
I was extremely proud to be asked to write Andy Capp and even more proud to write it for over ten years. As there have been four books published of my Andy Capp scripts, I'd like to think I did a decent job. Although I'm extremely sad to give up this wonderful job, I still have Beau and Horace to keep me going. AND I get weekends off!"

After April 2011, they were scripted by Lawrence Goldsmith and Sean Garnett. Roger Mahoney is still the artist. Lawrence Goldsmith recalled that Roger continued writing Andy Capp alongside Beau Peep and A Man Called Horace for much longer than he’d originally expected:

“It was supposed to be a temporary thing, but Ken (Layson) never organised anybody else to take over, so Roger ended up doing it for ten years. “He virtually had a nervous breakdown, so he had to stop doing it.”

Roger was once asked which strip did he he find hardest to write for? Beau Peep or Andy Capp?

"Andy Capp. Beau is my own creation so it comes more naturally to me. Also, I write weekly themes for Beau (and Horace) and I find it's easier to come up with gags when there's a bit of continuity. I've had to alter my style quite a bit with Andy Capp and the gags are all "one-offs". I write, say, a strip where Andy's in the pub and then I have to start from scratch again with a different setting. It's MUCH harder."

He went on to say:

"As it turned out, I ended up writing Andy Capp for over ten years and I am extremely proud of that. It was never a question of emulating Reg's work but trying to keep the spirit of the strip alive and I hope I did that. Because I write two other daily strips of my own creation, the workload was always going to be difficult to handle and, after a decade of writing 1,000 strips a year, I reluctantly asked to be replaced as Andy's writer. While this probably saved my sanity, I still miss that Novocastrian old bugger!" 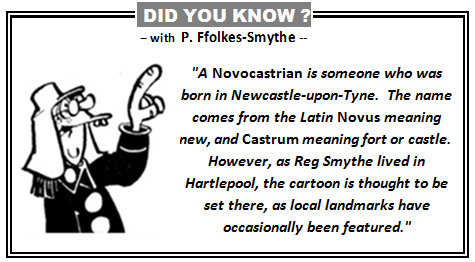 "I originally reckoned I'd write Andy Capp for a couple of years but, before I knew it, a decade had passed. To put it simply, I got tired. I was so used to working every weekend that I found it freaky to suddenly realise that I didn't have to sit at my desk on a Saturday and Sunday morning.
Please don't get me wrong -- I'm not complaining for a second about this wonderful experience and I was well rewarded for my efforts. It was, well, just time to have more than a week off once a year. Also, I now have a book to write....."

Re-prints of the two Rogers' strips were published in “The New Andy Capp Collection” by David & Charles Books (Book 1 in 2004, and Book 2 in 2005). Titan Books published more of their strips in 2011 in “The Andy Capp Annual”

Acknowledgement
Much of the above has been nicked (with authorisation and many thanks!) from Paul Slade's brilliant history of Andy Capp on http://www.planetslade.com/andy-capp-reg-smythe01.html , and we urge you to read the full, fascinating article.

“I've never felt that Reg Smythe got the credit he deserved for creating the worldwide comic phenomenon that is Andy Capp. Well done, Paul, for putting that to rights with your splendid essay.”