Twenty-one Beau Peep books have been published in the UK -- Books 1 to 20, plus the un-numbered 'Colour Collection'.

From Book 10 they became the new 8 1/2" x 8 1/2" square shape in 1989 (in line with most other newspaper cartoon strip anthologies of around that time), again mostly black and white with some colour pages (although the Beau Peep Colour Collection was entirely in, er, colour).

The latest addition to the series, published in 2012, was the "Return of Beau Peep", consisting entirely of black and white strips, in an 8 1/2" x 7" format. On our Forum in December 2008, Roger commented on an Ebay listing:

"I see that the latest Book One up for auction has now reached 50 quid. Amazing. Yeah, I know that one of them went for £150 (which is mind-boggling to me) but I still find it incredible that these books, which cost 65 pence when they were first published, are still commanding such amazing prices. Of course, I'm extremely chuffed but I really can't get my head round it. Good Grief! What do people pay for early 'Peanuts' books?" 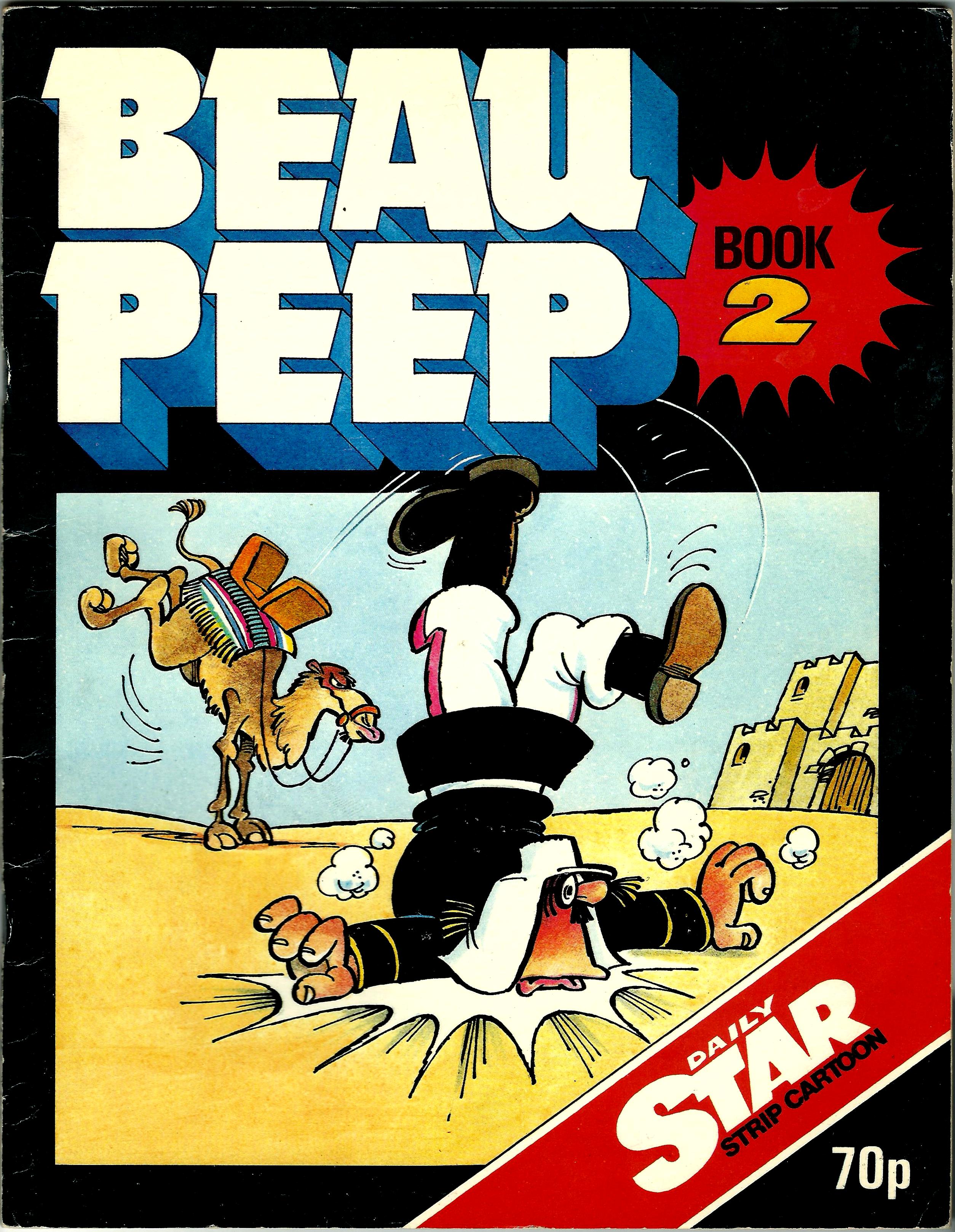 Roger commented about Books 1 and 2:

"To my knowledge, no strips have been left out which makes the books rather special because they are printed in the actual order that they first appeared in the Daily Star. Book 1 had a print run of 30,000 and sold out , but was a disaster as far as in terms of distribution was concerned. Most of the sales came from the mail order offer as the book was not readily available in the shops."

The subsequent annuals carried a mixture of black and white and colour strips, but unlike Books 1 & 2, unfortunately are not the complete run of strips as originally published in the Daily Star. 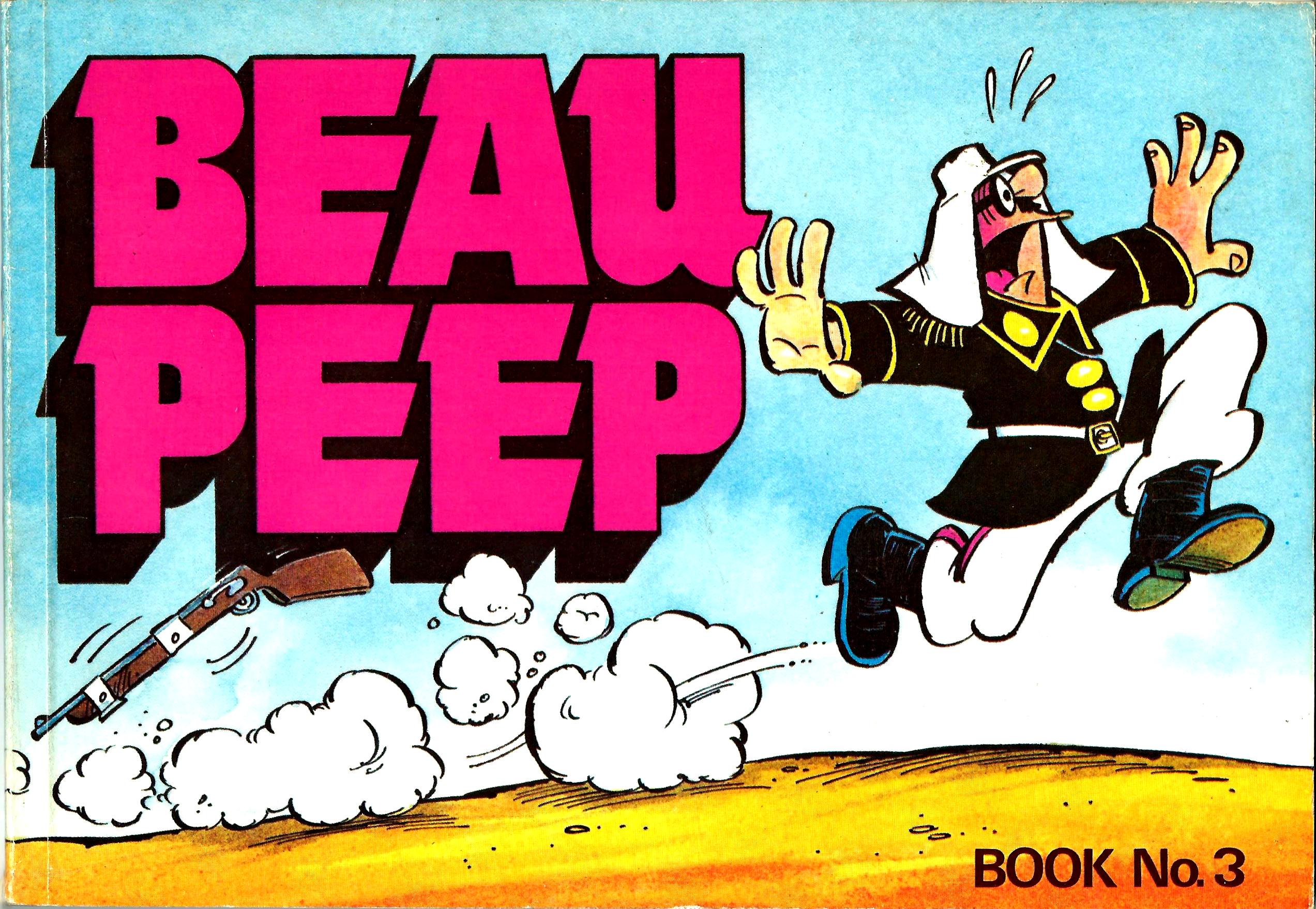 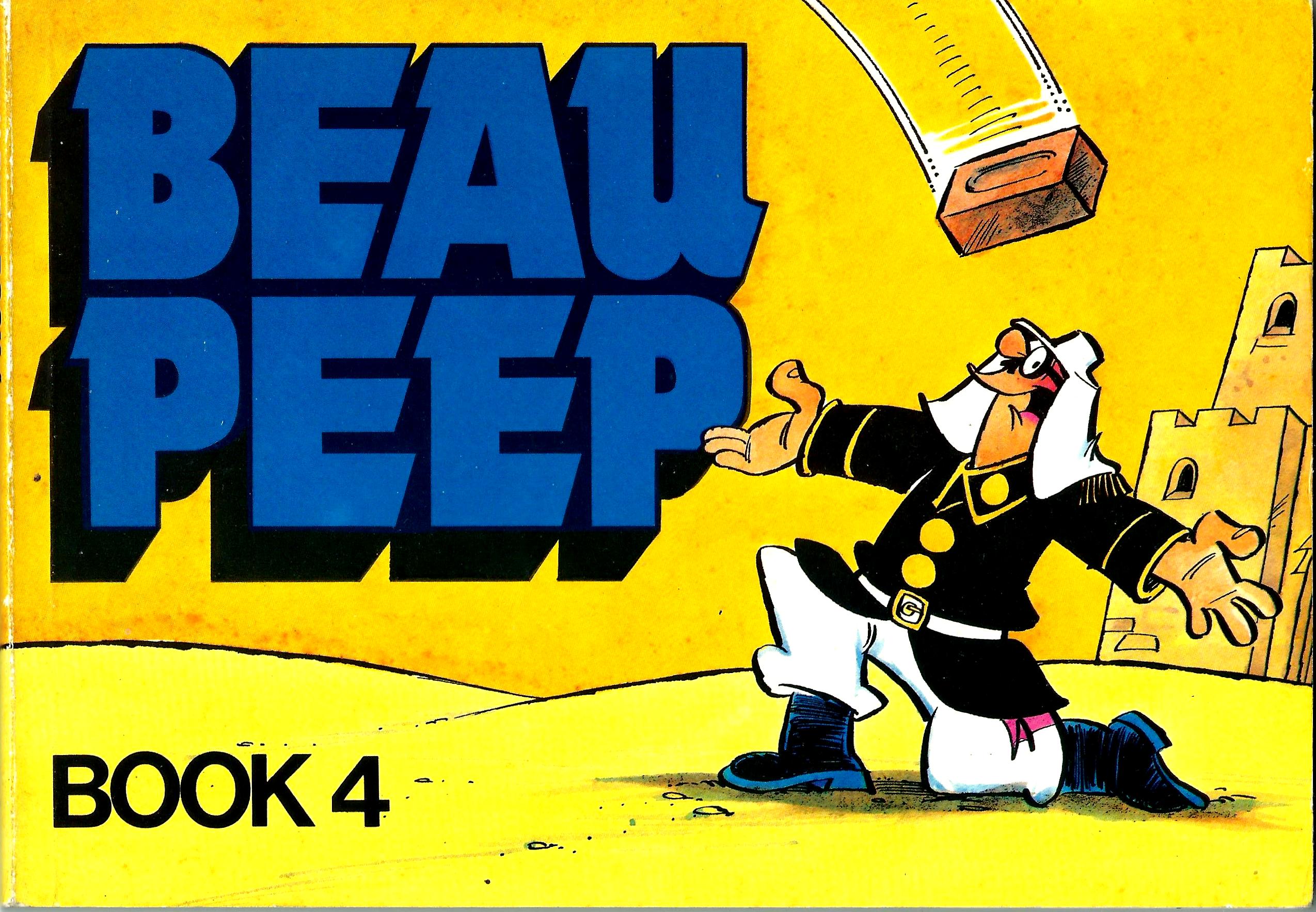 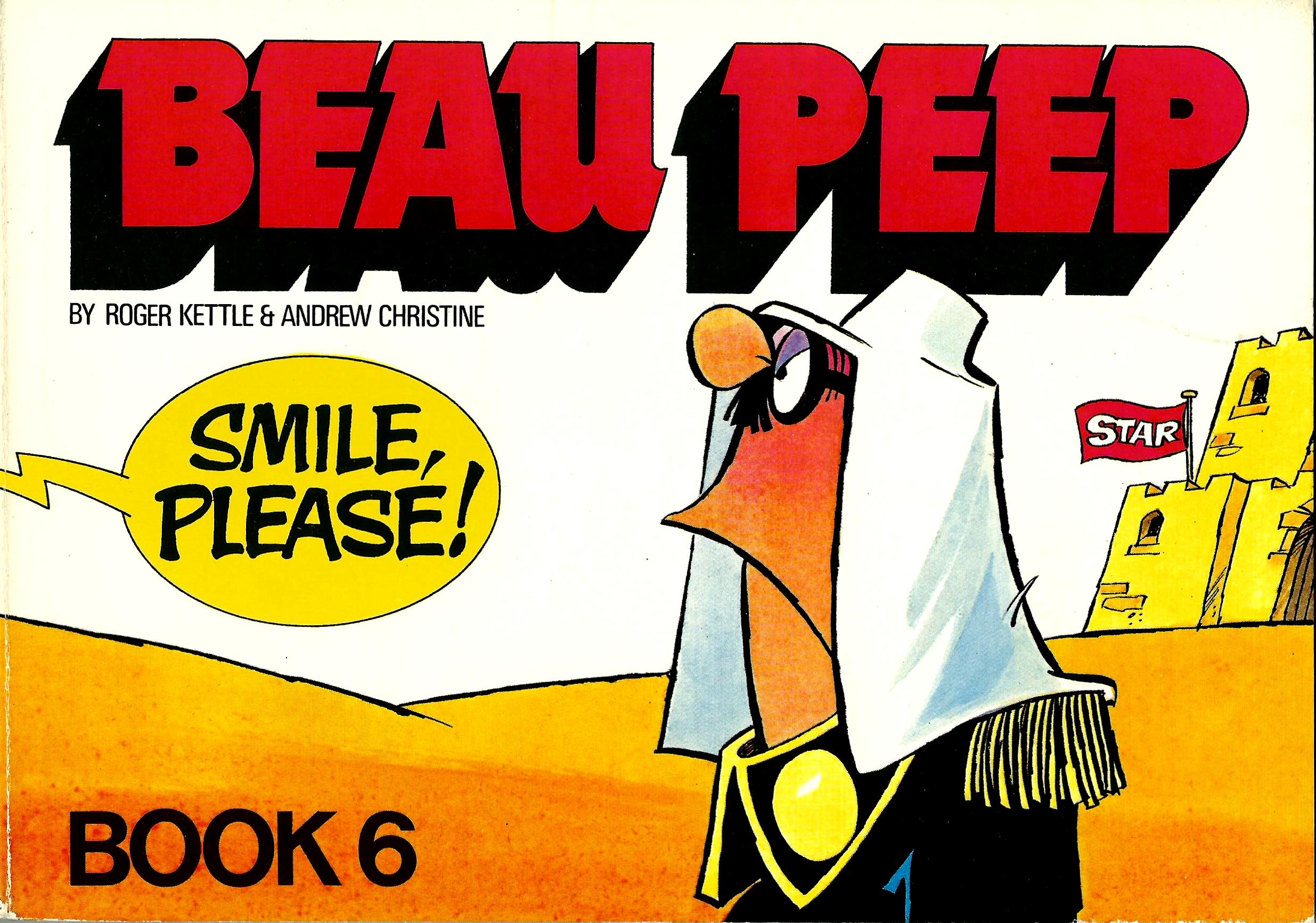 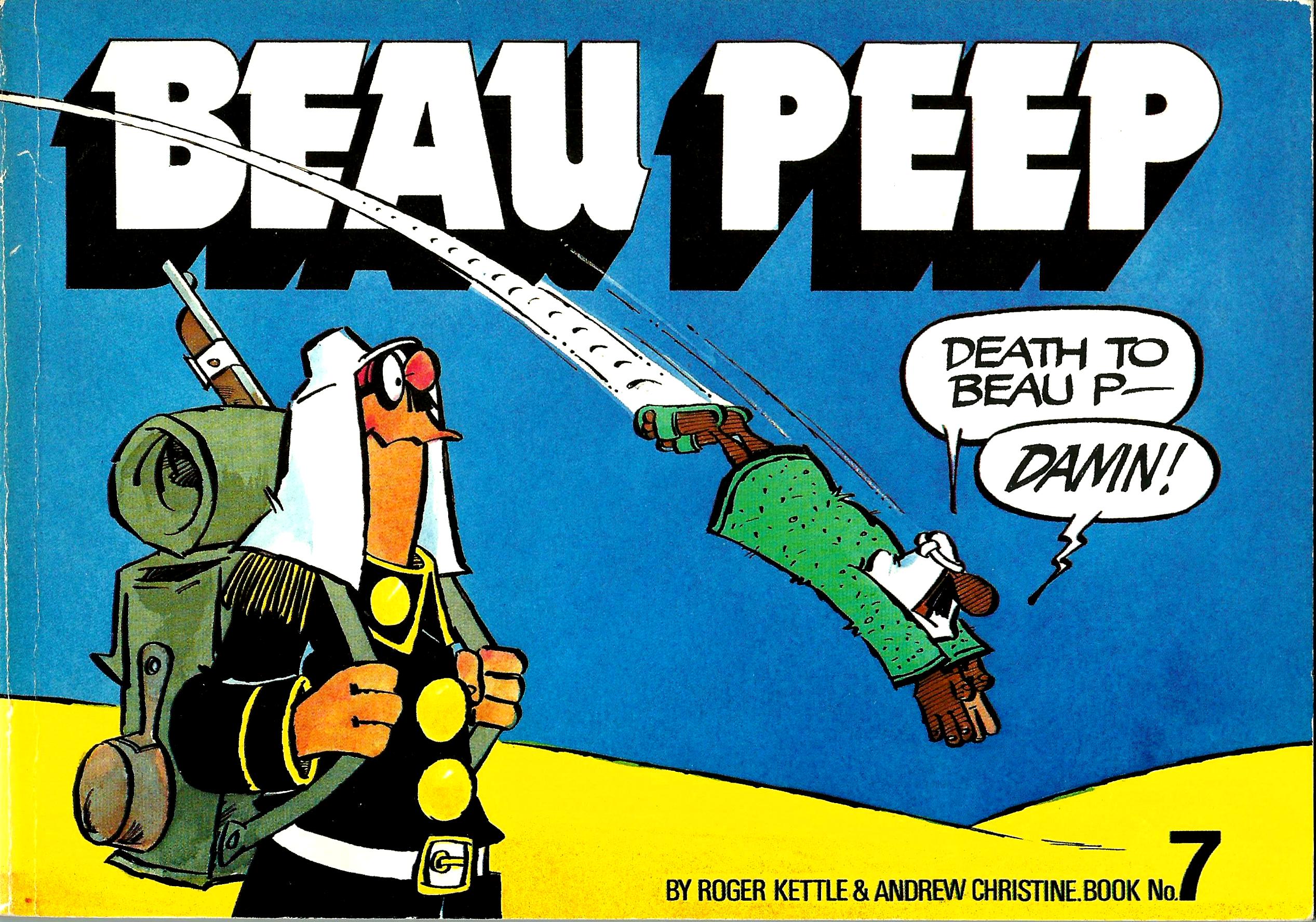 Welcome to Book Seven.
Seven years -- sigh! Remember those days? Petrol was three farthings a gallon, cigarettes were tuppence a thousand and Britain used to occasionally win things at sport. My Doris was a petite size 24 and Dennis hit an intellectual peak with a brain-cell count of eleven.
And what of my two chroniclers, artist Andrew Christine and writer Roger Kettle?
Well, Andrew was a still-active 83 and Roger could still eat his meals without a straw. Anyway, enough nostalgia -- I hope you enjoy this latest collection.
Love, Beau Peep.
P.S. Hands up who said "I've been given a book of his every year for seven years, but I don't remember breaking a mirror."? 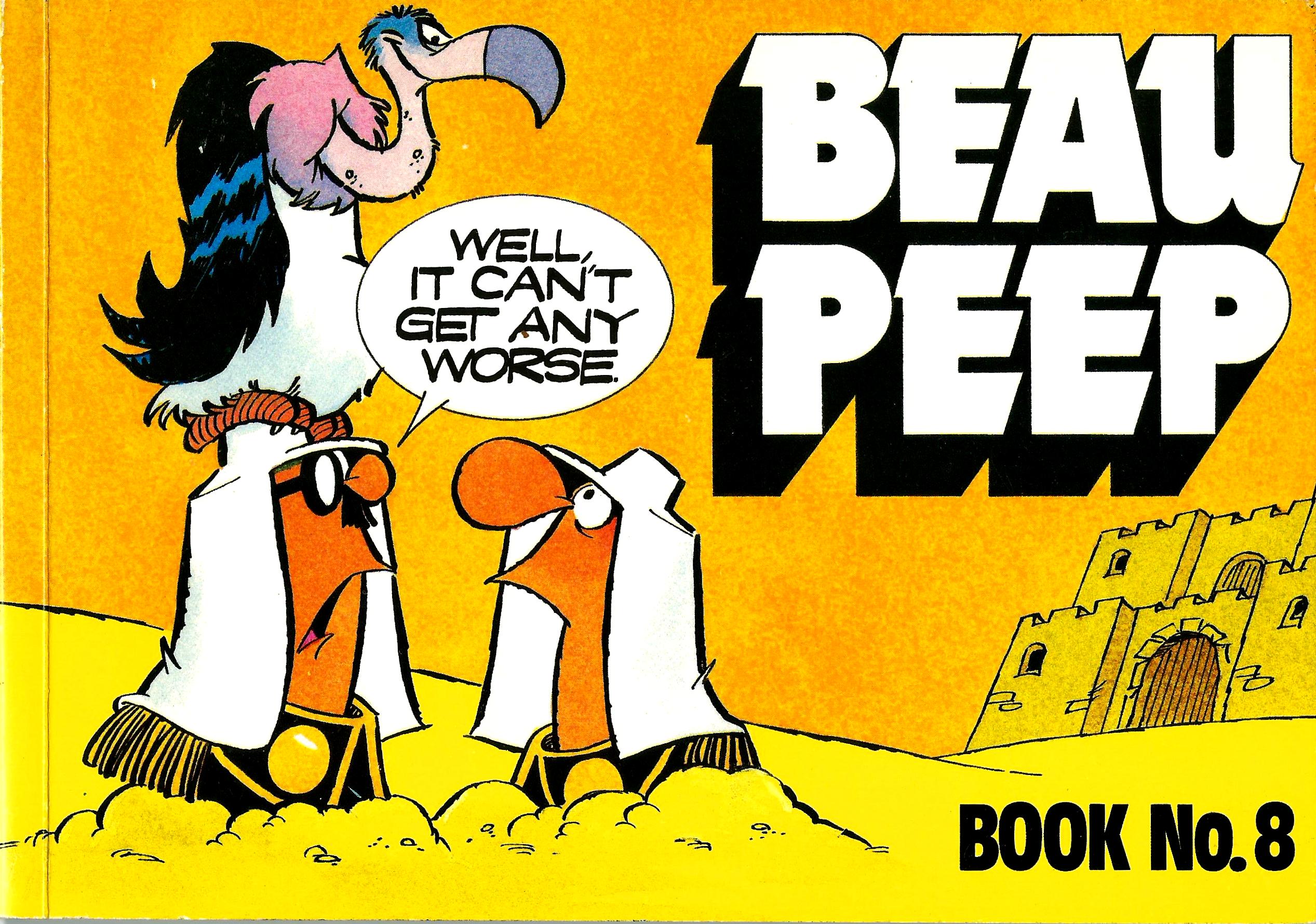 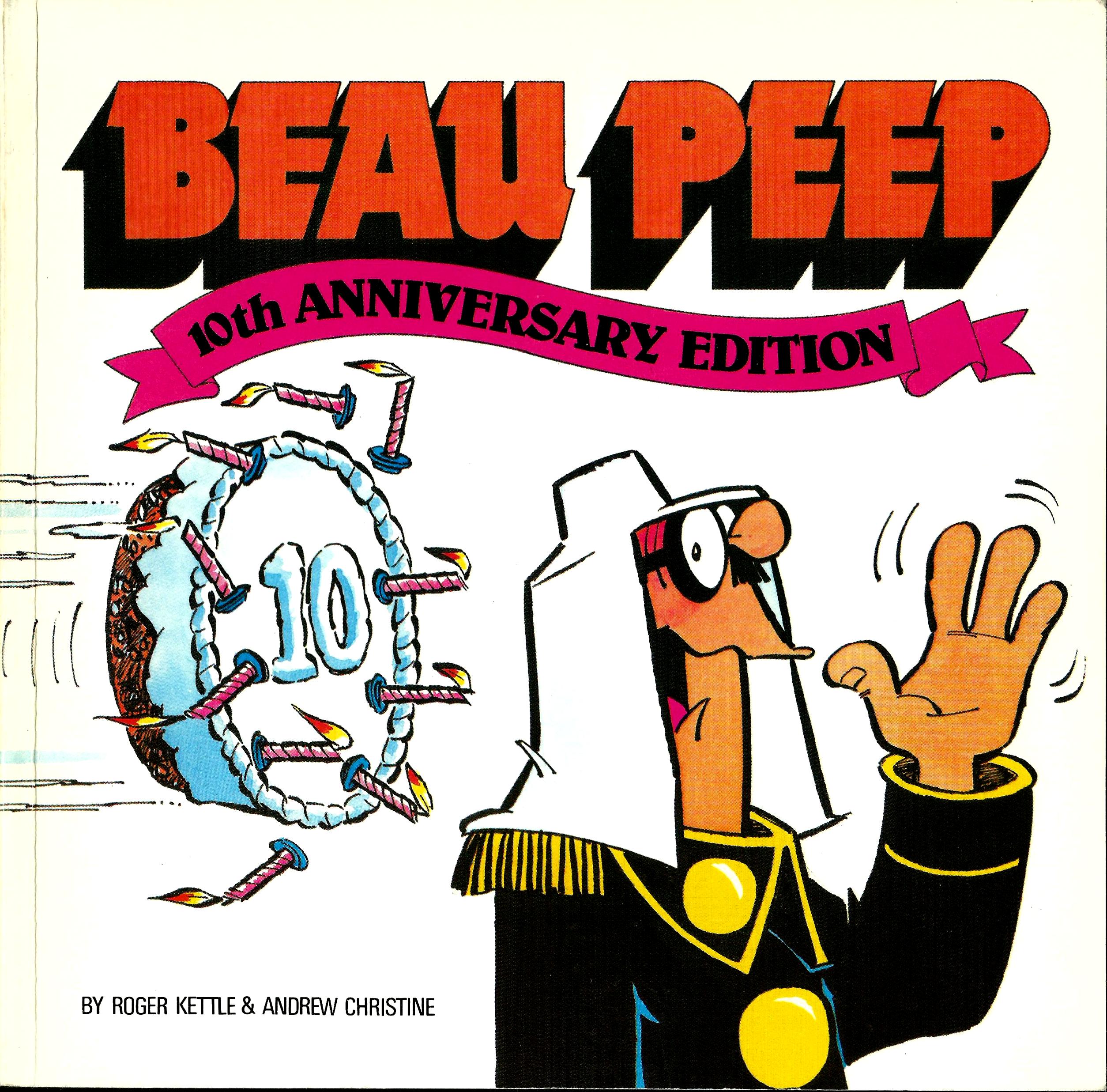 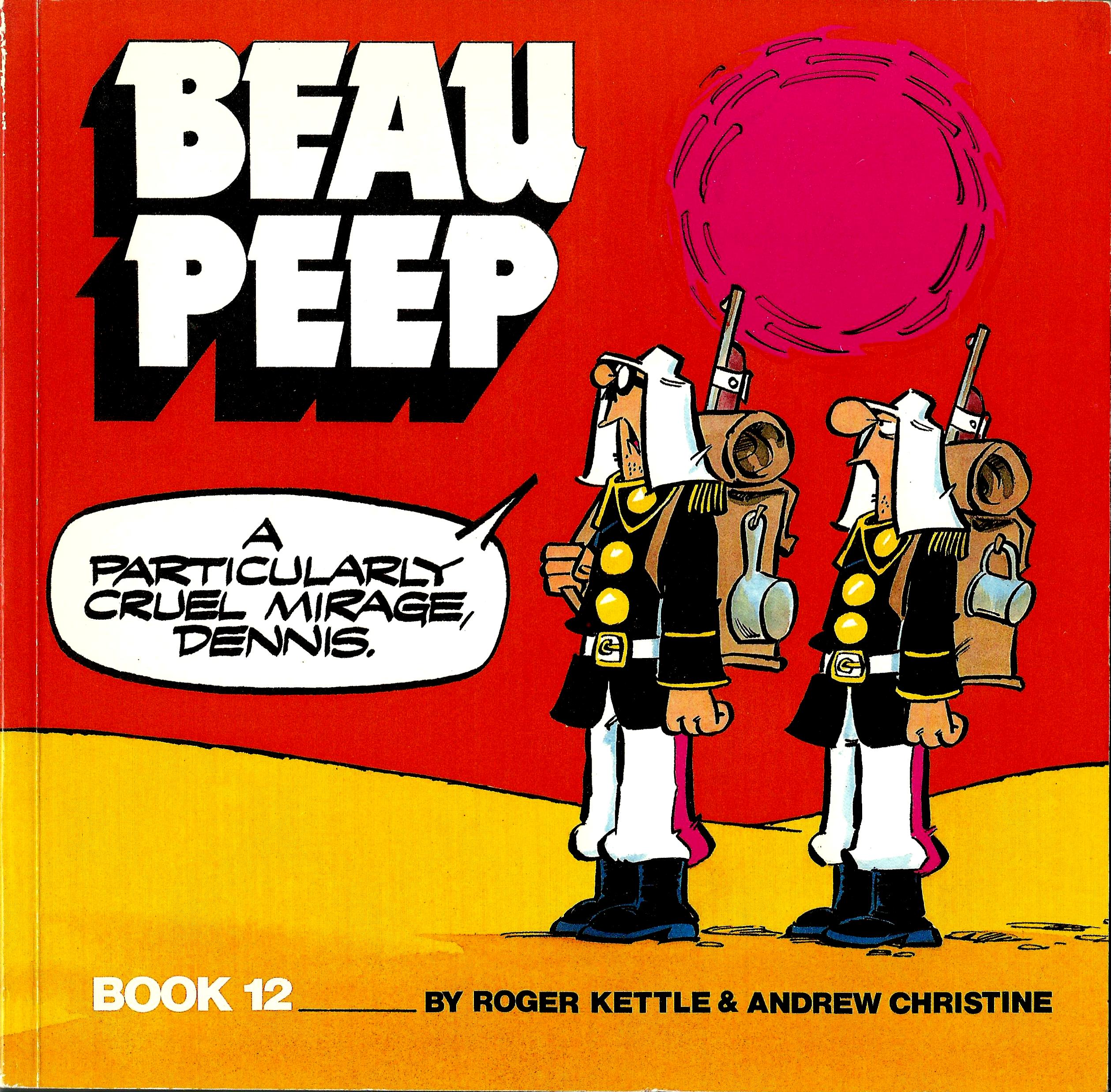 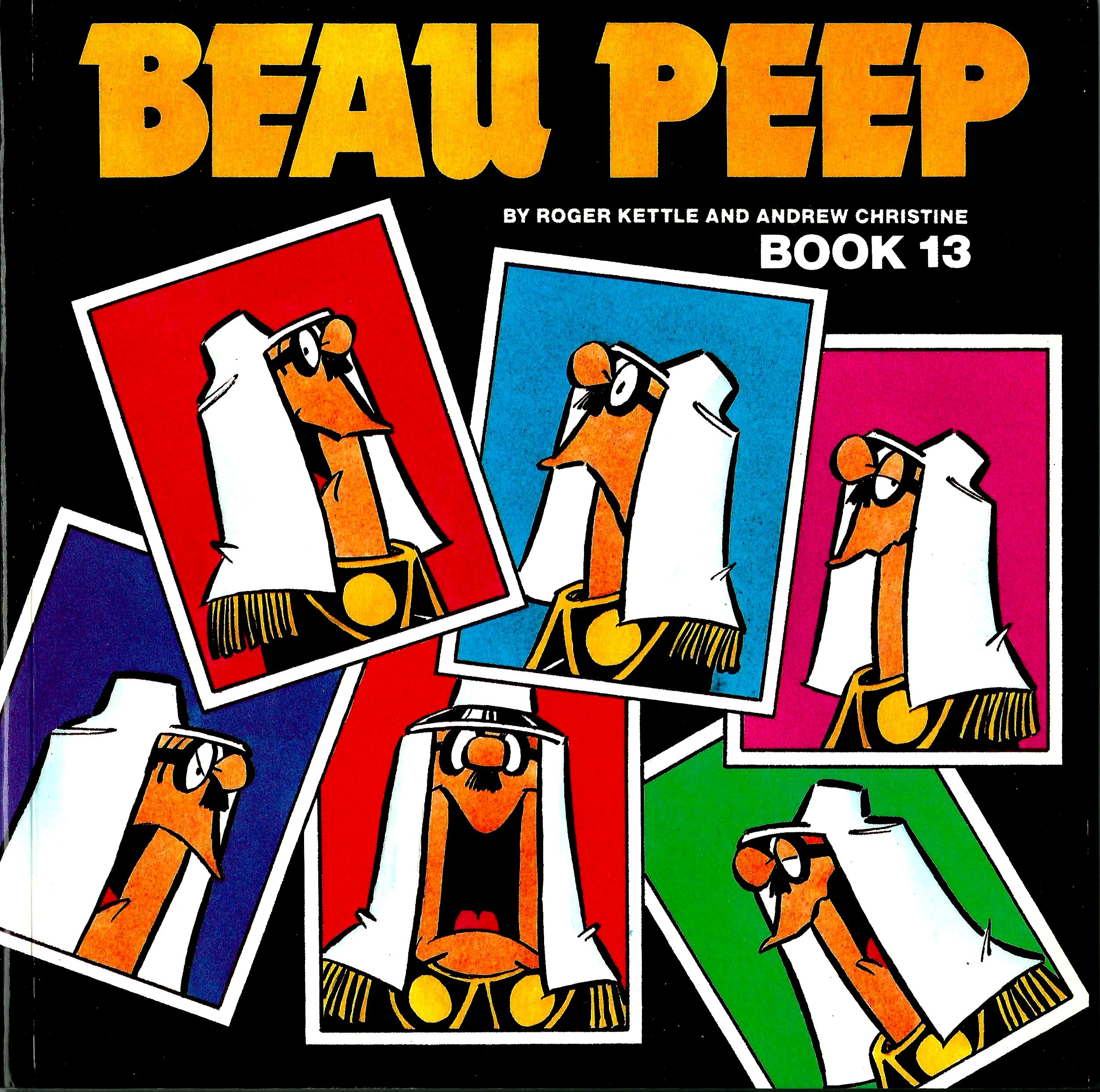 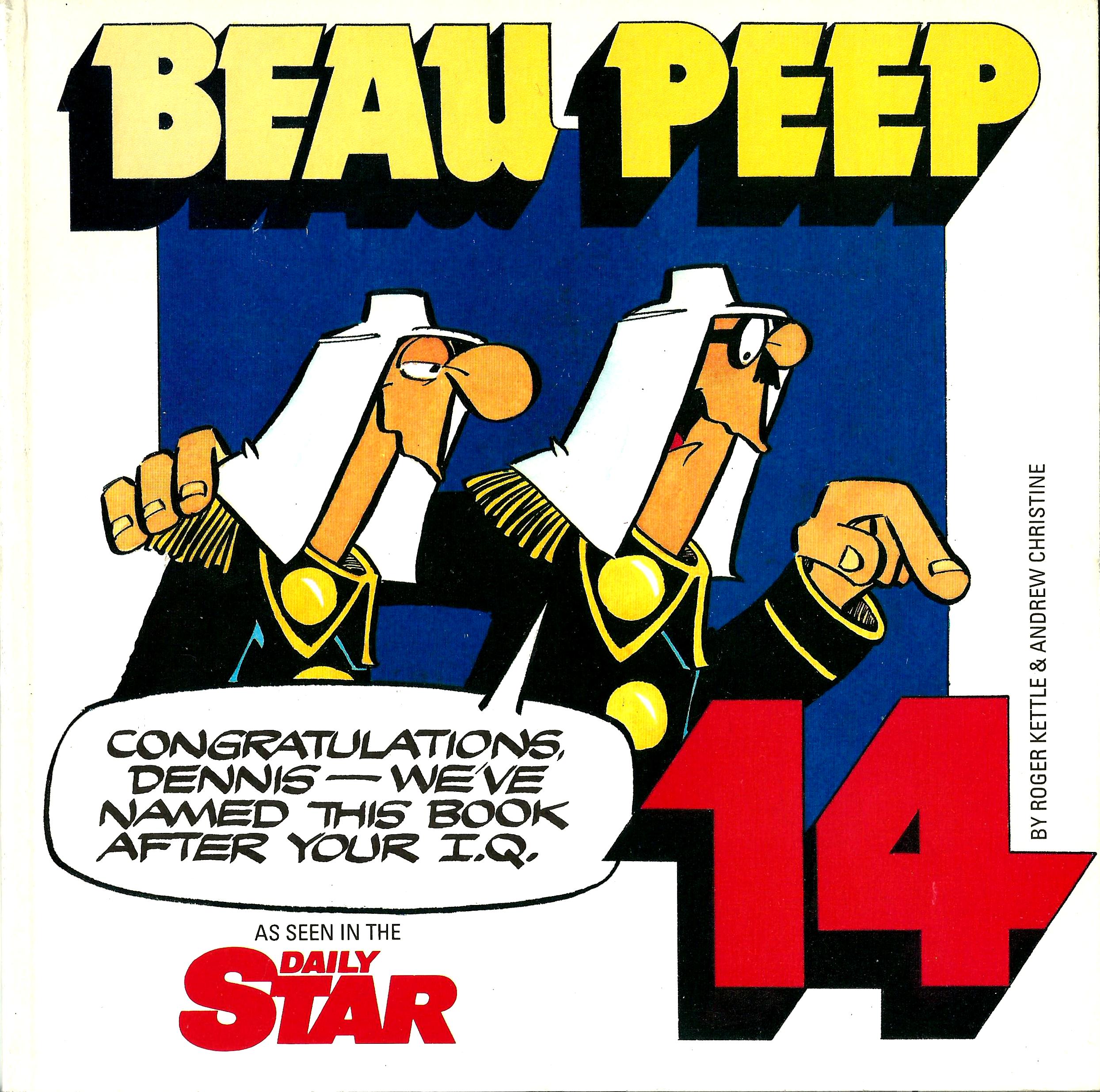 Inside this book, you will find this cartoon strip plus another 270 odd. That works out at roughly 810 individual frames, a similar amount of speech-balloons and more than five and a half thousand words. Talk about value for money, and we haven't even mentioned all the commas! 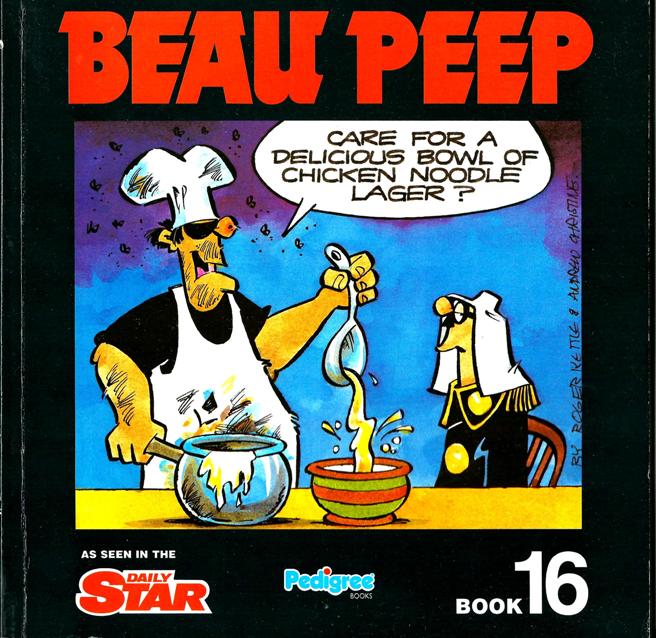 This is the 16th Beau Peep book. It all began some 16 years ago, with book 1. Then came 2,3,4,5 and 6. There was talk of bringing out book 8 next but, in the end, it was decided that book 7 should hit the streets first. Then came 8. After a lengthy debate about what the title should be, book 9 was published, followed by 10,11,12,13 and 14. Last year's book amazed a lot of people by being titled No.15. So here we are at the 16th Beau Peep book. Goodness knows what next years' will be called. 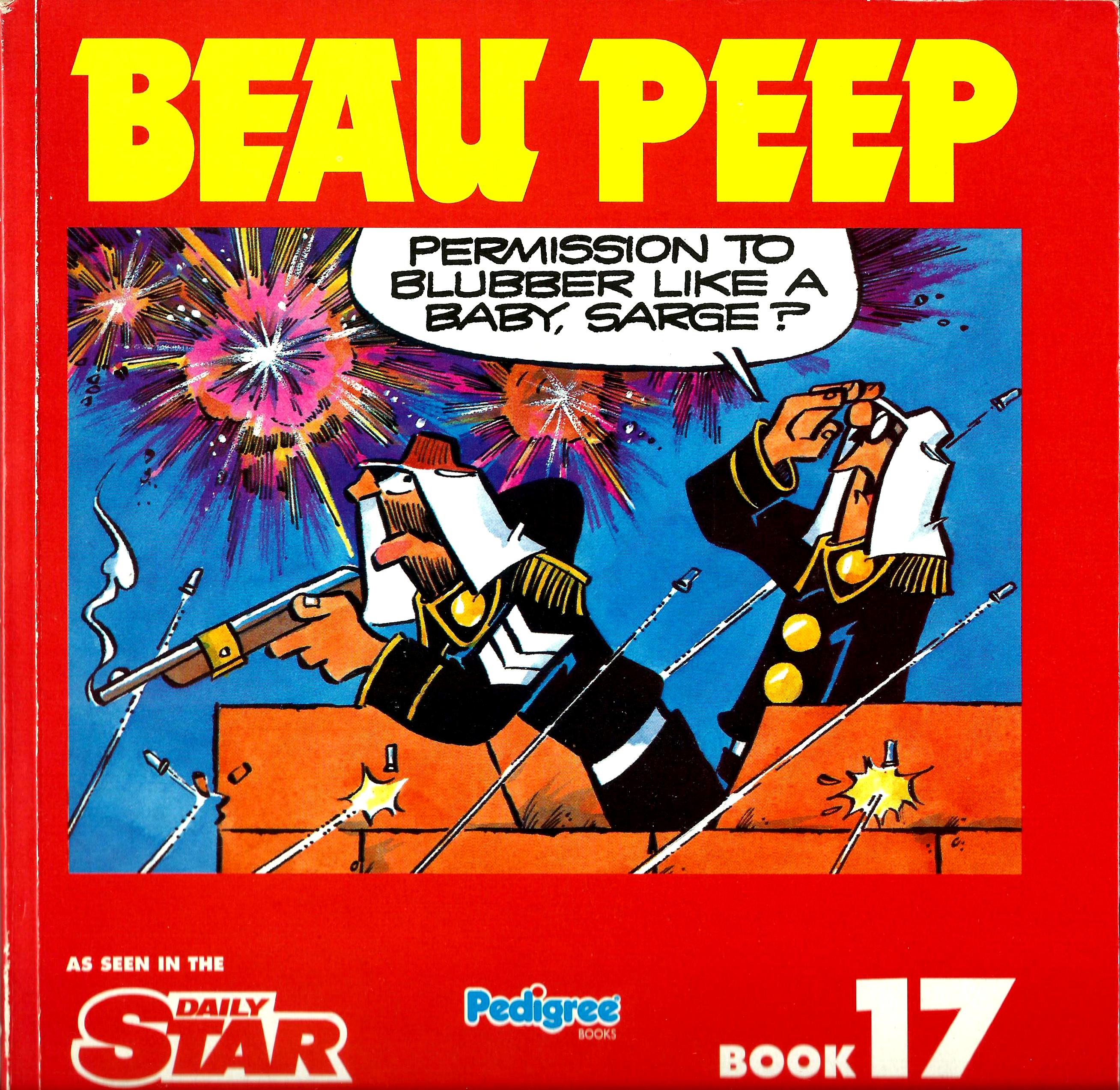 17 years ago it all began rather imaginatively with Book 1. Hardly surprising then we decided to call this year's collection the 17th Beau Pep Book. Place your bets here on next year's title. 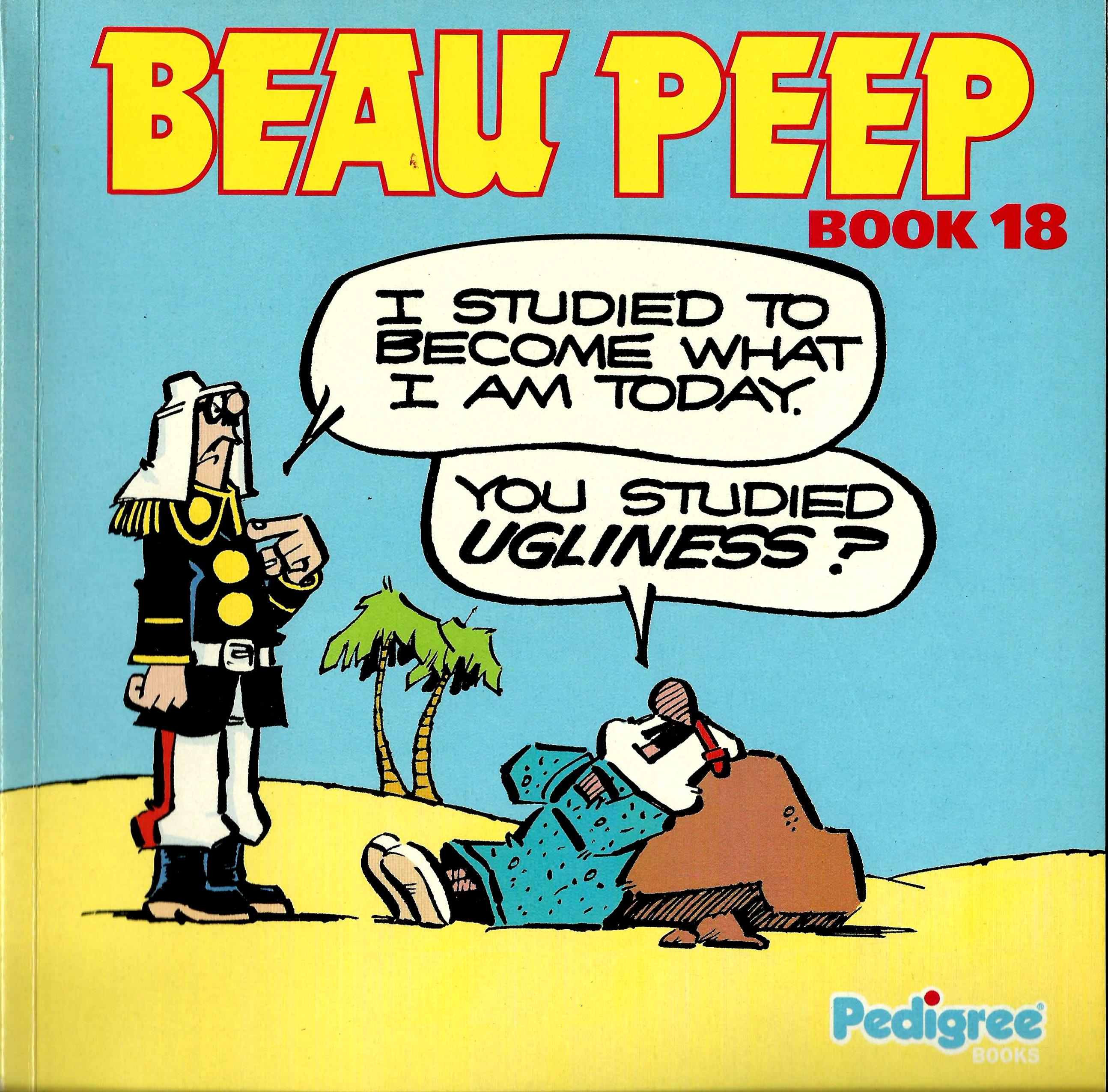 Beau Peep Book No.18. The coming of age.
Beau Peep books are now allowed to drink in pubs, to vote and to watch videos. These are, of course, three things which should not be attempted in one day. On one spectacular occasion, the Beau Peep creators did just that and following an afternoon spent shuffling between the pub and the video shop, they ended up voting...for Pamela Anderson. Shown above is the mysterious 'alternative version' of Book 18, with Dennis on the cover. This is a 'printer’s proof' but a few copies were accidentally released to book shops. These are incredibly rare and are worth over £3,000 each. Unfortunately, as previous online auctions will testify, the value drops to about only a fiver if the copy has been signed by the writer and artist. 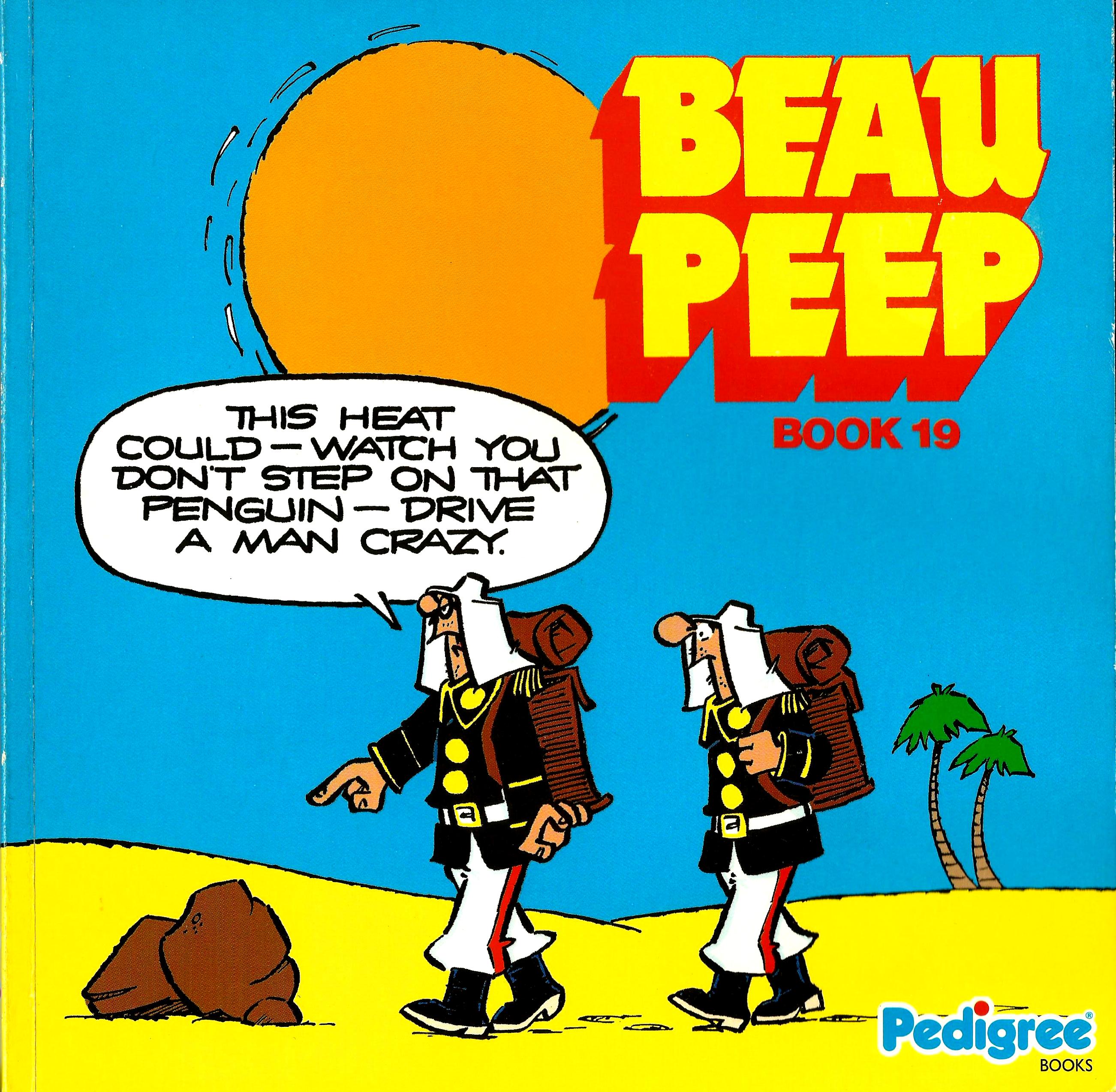 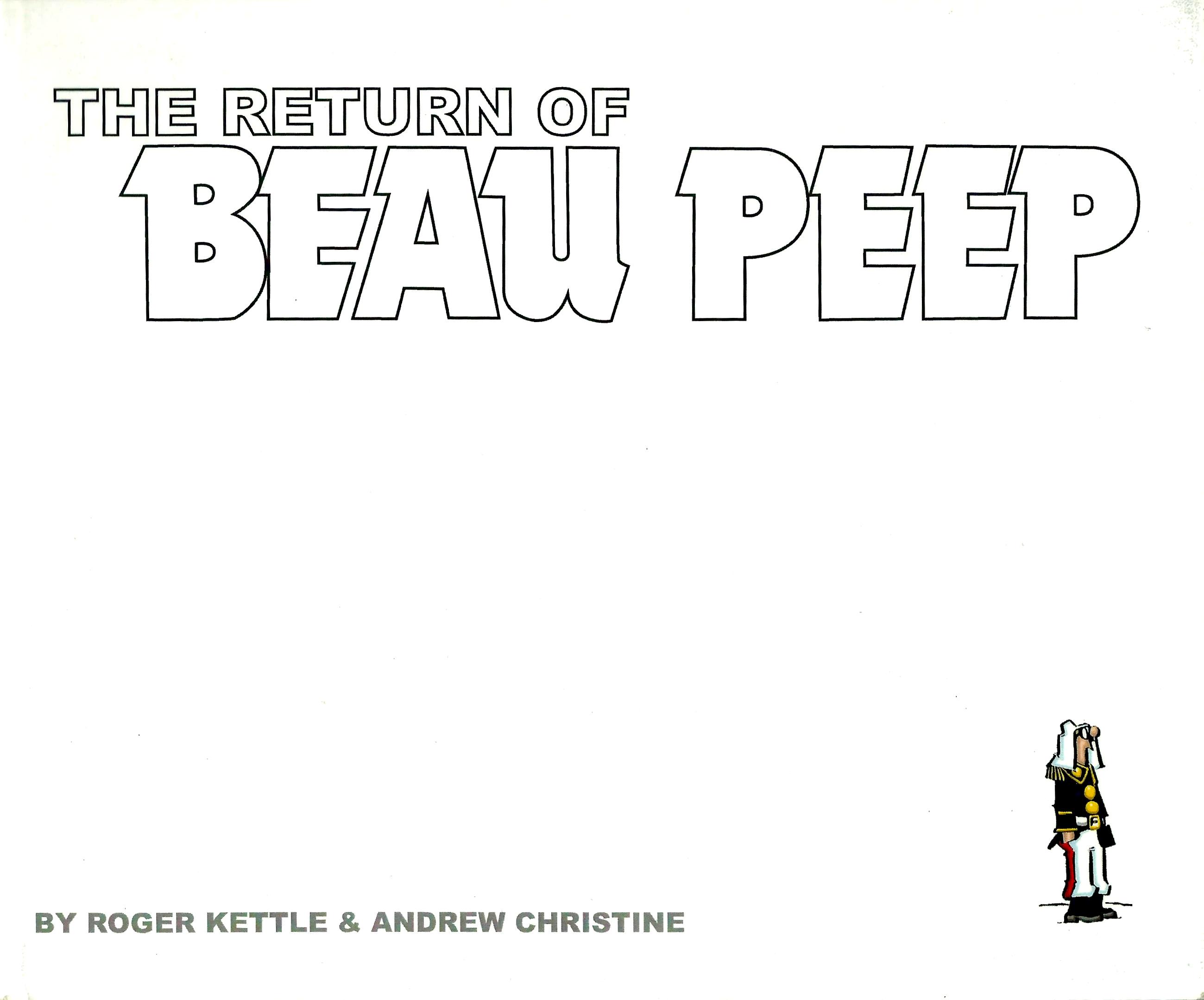 Beau Peep has been running since 1978 and, after taking off our socks and shoes, we've worked out that this comes to 33 years, or one third of a century. And we're both still 28 years of age. Remarkable. Hope you enjoy this latest collection of strips. Roger Kettle and Andrew Christine.

'The Return of Beau Peep' was 'self-published' by Roger and Andrew, using a print-on-demand company in America. It's known by fans as the Beau Peep White Album, due to the minimalist cover.
This is one of the customer reviews posted on Amazon:

"Beau Peep is still the funniest cartoon there ever has been. Anyone who doesn't laugh at this is either dead or something worse. I know lots of people who have this book and they laughed. That's because they are alive.
The drawings are brilliant and the speech bubbles hold just the right amount of words. It's almost as if the writey man and the drawey man were in cahoots about it all.
The white cover is perfect...not overly white and not underly so, and the title of the book describes it perfectly. The Adventures of Beau Peep are just that...adventures.
I must praise the Fort too, for it's build quality. I was looking through my old issues and it hasn't deteriorated a bit. That's quality workmanship for you in such a hostile environment.
May I also say how happy I was to realise that this wasn't just for the "readers" amongst us..no siree. For all you mathematicians out there, this is right up your street. Each page is numbered...with a different number in a logical mathematical progression. How totally cool is that?
Honestly, buy this book, and any others if you can pick them up cheaper than this. I'm going to buy another one to keep my first one good...in fact I'm going to buy a third to keep my second one in top nick.
Top job Mr Teapot and Mr Christmas. A1."

Four books plus a Supplement, of translated strips, in black and white, have been published in Italy (where the strip is known, bizarrely, as 'Beep Peep').

Some of the Daily Star adverts for the books: 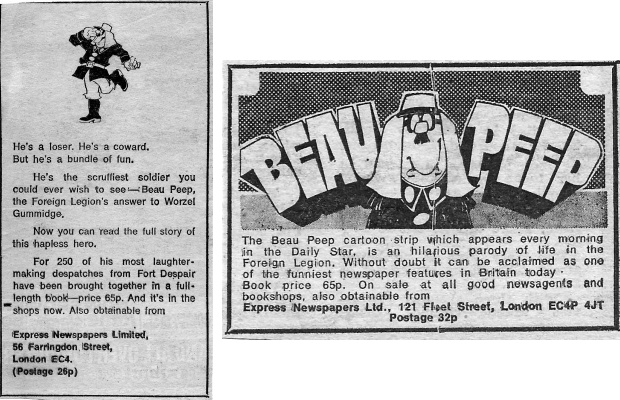 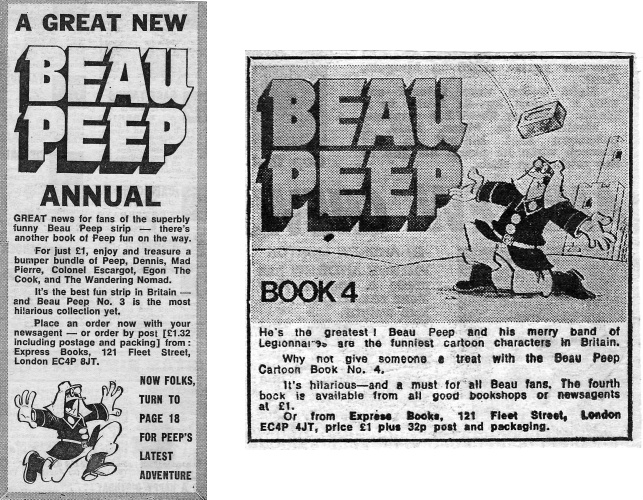 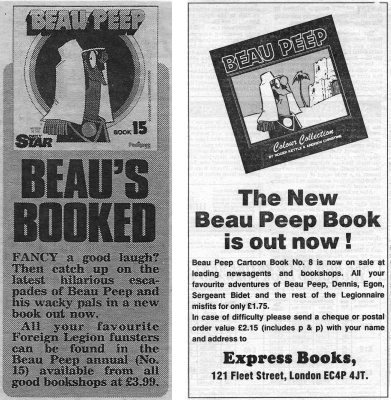 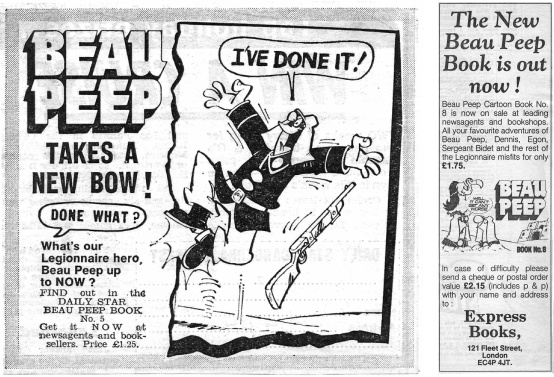 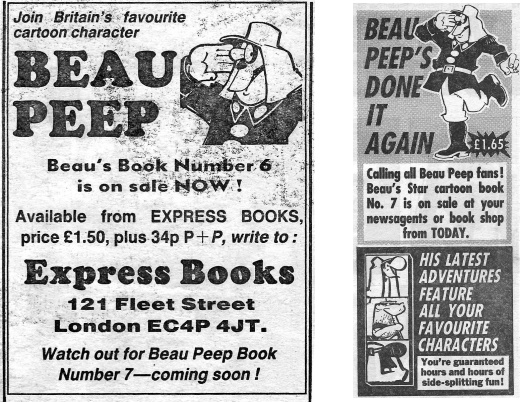 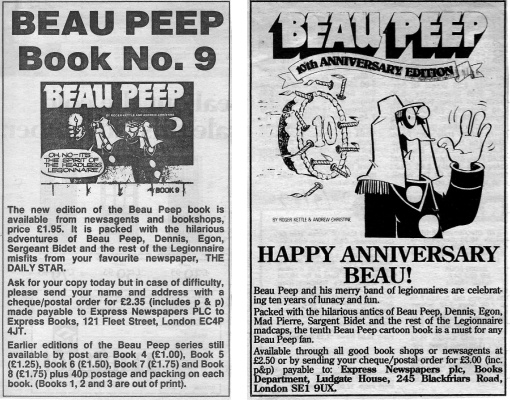